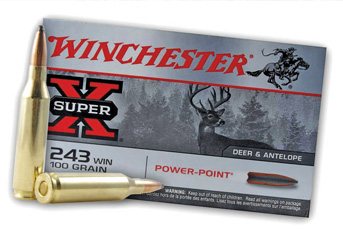 It was in 1955 that Winchester announced a new cartridge that took the sting out of their well respected .308 Win. The pre-launch hype described it as the all-new 6mm Winchester. It didn’t stick. To be fair, its launch date and description were on a collision course with a new product from Remington… the .244 Remington.

Something had to change and so the World was treated to the .243 Winchester. It was based on the then three year old .308 Win case but necked down to take the .243 diameter pill. The rimless cartridge sharing all the same dimensions up to the shoulder, according to SAAMI. Both Remington and Winchester were reacting to the growing popularity of wildcat 6mm cartridges from the likes of Fred Huntington (the RCBS man) and Warren Page amongst others, often using the .308 as a parent. However, whilst the .243 Win was an almost instant success, the Remington failed to impress. Things went full circle in 1962 when Remington responded to the dismal sales of their .244 creation – reinventing it in 1963 as the now well respected 6mm Remington! So, what’s in a name?

MULTI-ROLE
Launched with 80 and 100-grain bullet options in concert with new Mod 70 B/A and Mod 88 L/A rifle chambering it was an attractive option for American deer hunters and pest controllers alike. However, it will not make the grade with the larger North American game, such as elk! This highly versatile cartridge was soon adopted by many short action rifl e builders. Mostly offered with 1 in 10 twist barrels it was comfortable with heavy bullets and delivered its near 3000 fps performance with surprisingly modest recoil. It really was an instant success, meeting the ‘one-gun’ aspirations of many sporting shooters around the world. Indeed, it would now be easier to note those gunmakers who have not chambered a rifl e for this universally popular calibre.

Handloaders are well served with all the requisite materials, including a diversity of bullet designs and weights that span every practical application. A trawl through the lists from current makers gives a range of 50 to 117-grains. With suffi cient barrel length the cartridge has a broad powder speed tolerance, Lee quoting data for no less than 30 propellants suitable for the 100-grain BT Spitzer. For followers of factory duplication the 100-grain pill with 38.9-grains of H4350 is pretty close, producing around 2795 fps, giving deer legality and remarkably good life from my Hornady brass. British ‘varminters’ are equally well served, IMR 3031 getting rave reviews when used with the 75-grain HP. 39.5-grains giving over 3200 fps. As a dedicated paper-puncher the Rem 6mm has supremacy, but at the expense of materials and life. But for all-round outdoor pest, pot and trophy shooting the .243 Winchester is a tough act to follow.

The lasting popularity of this calibre is refl ected in the wide availability of both new and good used rifl es from all the popular makers. By example, the Ruger M77 and Sauer 202 are examples of quality rifl es that span the budgetary spectrum