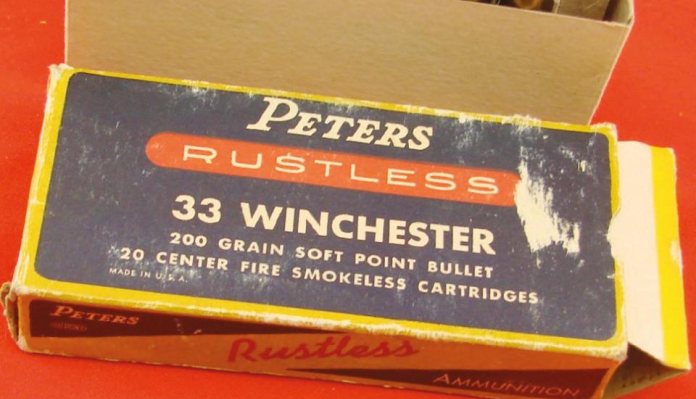 The advent of smokeless propellants, at the turn of the previous century, saw a flood of new or ‘redeveloped’ calibres from the commercial cartridge manufacturers of the day, and none more so than Winchester! Their learning curve with these new-fangled propellants can, to some degree, be charted by the shapes and sizes of cartridge design that they produced. The .33 Winchester; aka .33 Win or .33 WCF (Winchester Centre Fire) is a case in point. ‘Big bore’ was the legacy of the early metallic black powder rifle cartridges with medium bores still a relatively new design concept. Sitting neatly between the .32-40 Winchester/Ballard and the .38-56 Winchester, first impressions of the medium bore .33 Win would have indicated that it was yet another black powder design. All it lacked was the expected B/P weight nomenclature, say .33-45 or .33-40 (Oops, that was the Harry Pope wildcat version of the .32-40 Ballard). Hmm, maybe that’s where Winchester got the idea for their .33?

The rimmed, heavily tapered and shallow bottle-necked cartridge was launched in 1902. From the start, it was loaded with a smokeless propellant and topped with a 200-grain SP bullet. It was intended for use in their Model 86 Lever Action rifle for use on medium game, such as deer and elk. Claimed muzzle velocity was a reasonable 2200 fps but the poor bullet BC gave it limited range. It never sold well, with the Winchester Model 1885 and Marlin Mod 95 the only other commercial chamberings offered for it. Out performed by many new smokeless rivals, it was superseded by the .348 Winchester in 1936 and dropped from production around 1940.

Over the past 20 or 30 years, there has been a growing cartridge revivalist movement in the USA, fuelled at times by the difficulties associated with the purchase of many popular calibres. Obama proofing saw the cobwebs blown out of many a wall-hanger, as stores sold out of everything ‘modern’. The result was a thriving ‘cottage industry’, offering a multitude of yesteryear calibres, including our .33 Winchester. Hendershots of Hagerstown, Maryland include this cartridge in their Extreme Ammunition listings. Ammo-One also list the cartridge with the headstamp 33 WCF JBA, the latter being the trade mark of Jamison Brass & Ammunition. New, un-primed JBA brass is to be found on the CapTech International web site at around $140 per 100. (Out of stock at the time of scribbling).

As Chuck Hawks observed in his 2005 retrospective of the cartridge, the only suitable proprietary tube mag friendly bullet, the 200-grain jacketed Flat Point from Hornady was dropped from their inventory in 2002. It heralded the demise of further safe reloading by all but the determined bullet caster/swager. However, things have changed again with a new offering from Hornady, the Hornady FTX 338 Marlin Express 200-grain Flex Tip and the inclusion of relevant reloading data in their new 10th Edition Manual. As for tools, RCBS, Redding and Lee list the dies, whilst Redding also offer a case forming die from .45-70 Govt. brass. With large rifle primers and many of the listed powders easily obtainable, the hard part may be getting a suitable rifle!