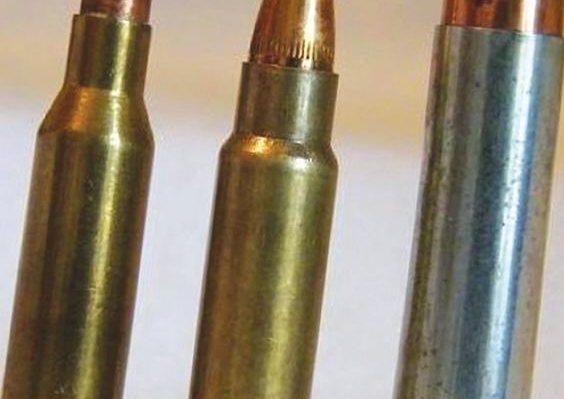 Sadly, this one is almost exclusively for the interested observer. Unless that is, you’ve either got Section 5 from the Home Office or a helpful custom rifle-smith and a bottomless pocket for ammo purchases. Introduced in 2001 by Heckler & Koch for use in their all new, MP7 personal defence weapon (PDW) the 4.6 x 30 cartridge was specifically designed to meet CRISAT requirements. In short, that means the ability to defeat the old Warsaw Pact body armour under NATO specified conditions at 200 metres. (The CRISAT target is defined as 1.6mm titanium (UK IMI Ti 318) plate supplemented by 20 layers of Kevlar (UK/SC/4468)).

THE PRESS CORPS GETS A GROUP!

Lucky members of the press were introduced to the cartridge and the pistol at the Knight Armaments factory in 2003, concurrent with the Orlando-based SHOT Show of that year. My experience was of minimal recoil, a good hold on POA even under full auto conditions and a remarkably flat trajectory up to 200 yards. Ammo comprised a 42-grain, hardened lead core, copper covered FMJ with an MV of just over 2000 fps. In burst mode it could hold 12” steel plates at 50 yards. Over time, the range of recipes built into this rimless bottleneck case has been substantially expanded. In addition to the 42-grain Ball there are now frangible, subsonic, tracer, AP training (limited range) and blank variants. Makers include Radway Green, DAG, Fiocchi, RWS and RUAG Ammotec. The list of options and makers tells us everything - this is a military/security cartridge, designed to deliver man-stopping performance at close quarters through body armour or vehicular protection.

If Fiocchi are to be believed, H&K have expressly forbidden the sale of brass or primed brass to any third parties, leaving the would-be handloader to start with his own once fired brass, Fiocchi’s 40-grain FMJ is listed in the USA by Midway. Things only get worse, for the availability of .18” calibre bullets is practically nil! Midway USA currently list a batch of “second quality” 40gn FMJ’s but they may go quickly, the first 5000 batch were hoovered up in days! At least the priming is straightforward, small rifle Boxer does the job. Load data and propellant choice provide another hurdle but then, how will you load the ammo and what the hell are you going to shoot it in?

BUILDING THE ARM AND THE AMMO!

All the books quote ‘factory loaded’ rather than a specific propellant. On the assumption that I’m going to use a custom carbine rifle I would consider working up loads with H4198 and/or H4895, or the IMR versions. This is a high pressure cartridge (>29 tons) and that would give me the confidence to use .22 Hornet data for my starting point. Assembly is not a problem as dies are listed by CH4D a custom made, 2- die steel set with shell holder costing about £175, and at least a six month wait! The carbine? Well, a custom build based around the strong Brno 465 action in .22 Hornet or .222 Rem would seem to be a sensible option – all we need to find is an .18 cal barrel with a 1 in 6.3 twist. As for a practical use, extreme pest control is about all that comes to mind!