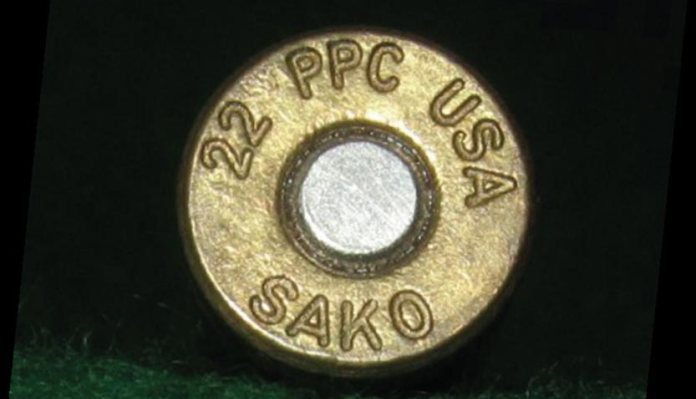 This month we have an American mini racer descended from Russian parents and grandparents. Born in 1974 it was a ‘wild’ kid until its’ teenage years and then commercially adopted in 1987 by Finnish manufacturer SAKO. Yup, it’s the gutsy little .22 PPC. That reminds me, I continue to be surprised by the number of experienced target shooters who seem to believe that the cartridge nomenclature ‘PPC’ refers to a course of fire or competition. Not so. An appropriate word to bind the PPC cartridge family together would be accuracy. The seekers after that accuracy being Benchrest wildcatters Dr. Louis Palmisano and Ferris Pindell, ergo, the Palmisano Pindell Cartridge – PPC!

Famous grandfather was the AK47/AKM round, the 7.62 x 39mm (it had many other applications). Dad was an early 1950’s hunting version in 5.56, based around this robust, compact, rimless case design and called the .220 Russian. Palmisano and Pindell took the .220 cartridge and increased the shoulder angle to what is generally accepted as the small case performance ‘holy grail’ of 30°. This extensive reworking of the shoulder and neck required subsequent neck turning in order to restore safe working properties, something that must be borne in mind by anyone making the conversion. Another perceived performance feature was something native to this design, the minimal degree of case wall taper. Versions of the case were further fine tuned to incorporate a reduced diameter flash hole under the small rifle primer… a subject that we touched upon in an earlier edition of Handloading Bench.

Established as a super cartridge in the world of Bench rest competition it nonetheless makes a highly effective, flat shooting pest control round. Zeroed at 100 yards it can deliver a drop of better than 2½ inches at 200 yards en route to its ‘competitive’ range of 300 metres+, however, without wind flags, drift can spoil the party! Whilst commercial ammo is available, this really is a handloaders preserve, customising the recipe to the rifle and application.

Both Bench rest and pest control shooters are well served with .224” pills. They’re available in a multitude of brands, styles and weights. Brass is not in every store, but can be found. For the dedicated reloader, parent brass can be acquired for conversion, subject to the careful control of case neck size. Tools are listed by most makers and data is published in every current manual that I own. Powders and primers are plentiful, Hodgdon Benchmark getting many favourable reports. Loading densities are all close to 100%, making a double charge impossible. At the high end, velocities close to 3800 fps are achievable. Case life is not that special and demands careful dimensional control.

THE REWARDS OF DEDICATION

Some volume rifle makers list, or have listed the cartridge, SAKO, Remington and Cooper come to mind as well as custom chamberings based upon Ruger and CZ products. One-off and limited run builds based around BAT, Kelbly/Stolle, Remington and RPA actions atop custom MasterClass and McMillan stocks are more common. Whilst current one-hole awards rest with the likes of the 6mm and 6.5mm PPC, the .22 variant continues to offer a great deal. Cheaper to run, more versatile and still a fierce competitor.