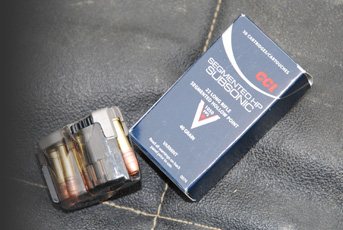 In the world of 22 rimfire ammo there is not a lot new; after all what can you do with a small piece of lead apart from bore a hole in its nose? Well up to now that is… as CCI has recently introduced their new Segmented Hollow Point (SHP). In fact not that new as they have simply re-named their existing Quik-Shot load as the SHP though added a sub-sonic choice too, plus a 22 Magnum, which could prove interesting.

As the names suggests the (segmented) 40-grain bullet is designed to break up into three equal pieces of around 13-grains each. I could not get much technical information, but it looks to me (after splitting some) that this is achieved by forming weakening rings into the body to make it less solid.

This seemed to me like a good idea as the big problem with any 22 bullet is its ricochet factor. This is a serious issue when hunting as once you have heard that awful zinging noise as it bounces off the ground it’s never forgotten. OK 40-grains of lead travelling at under 1000 fps might not seem much, but you never know!

Also interesting is the potential terminal effect, in theory you should get three separate wound channels thus causing faster incapacitation and death on rabbits and hares. Of the two species the former are definitely tougher and a badly placed shot even from a hollow point can leave them with enough life to kick into cover or down a hole.

The ammunition is copper-coated and shows a decent sized hollow point cavity which we are told is generating 1050 fps/98 ft/lbs. Testing used a 16” Browning T-Bolt rifle with PES MM22 moderator. Accuracy was compared with Winchester and SK subs and found to be about the same with ½ - ¾” groups at 50-yards and around the inch at 100 with a drop of about 4”. Like these two it proved good medicine for small game! Over the chrono the SHP showed a wide extreme spread (ES) at 51 fps with a low of 981 and a high of 1032 fps.

With accuracy established the next question was does it bounce or break? By chance a friend of mine had bought a quantity of the SHP as he too assumed it would be less prone to ricochet. His view; if it did he would start using his 22 rimfire more. After both of us had done some experimenting he simply handed me the spare rounds and said he could see no difference and would not be using it. I found the same as only once in about 20 shots did I notice any difference and reduction in the ricochet effect. However, this is merely an observation, as every make of 22 rimfire bounces - so hardly news. You just need to consider your backstop…

On the plus side the SHP does seem to kill better on body shots, so apparently the bullet construction works on the target. It was regularly punching over rabbits and hares with chest shots at normal rimfire hunting distances. However, I’m not sure about foxes as they can really take some punishment as we all know!

Though there are no claims that the SHP is ricochet-free, which is certainly is no, it perhaps offers just a bit more in terminal effect. But at just under £150 a 1000 it’s expensive by comparison to the other top brands, which I don’t think will do it any favours.

For: Certainly improves terminal effect on body shots
Against: Still ricochets near as much as standard 22 subs
Verdict: Different, useful but a bit pricey