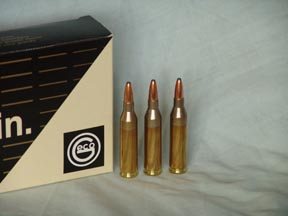 Geco is a brand produced by Dynamit Nobel in Germany and is perceived by many as being cheap, this, as I discovered is a big mistake. This is the first time I have tried it in the shape of their 243 Winchester; hardly top choice for Europe, but highly popular in the UK, for both fox and deer work.

Generally speaking the 243 Win is perceived as good for shooting light/medium (60-80-grain) bullets. Primarily as a deer hunter I like something heavier with 100-grains being the industry standard, though I would prefer more weight if I could get it. However, pushing the 243 in a standard twist rate barrel past 100-grains can be problematic, that is why this 105-grain Geco was of interest. Running at a quoted 2955 fps/ 2063 ft/lbs, which aces a 100-grainer at 3000 fps by around 100 ft/lbs. Not perhaps a lot but with a 243, as the distances increases, every little helps.

Pulling a cross section of ammo showed an average bullet weight of 104.7-grains with a powder charge of 42.9-grains of a short, stick propellant. The bullet is the RWS T-Mantel, which on inspection is a flat-base, soft-tip, spire point. RWS has this to say: “High to very high energy output in game. Somewhat stronger fragmentation, therefore exit holes are not always present. Very good stopping effect. Frequently used in battues because of the above reasons and because of certain insensitivity to minor obstacles.”

Experimenting with heavier 243 bullets in the past showed that a 105-grainer is on or just the right side of stability in a standard twist rate tube. Moving up even 2-grains to 107 can put it over, as I discovered. So the Geco in my opinion fulfils its potential very well if you are looking to push the heaviest 6mm you can from a normal 243 Winchester. At 100 yard this load was keeping it inside 1.5”, which was good and I have no doubts it will perform effectively on our British deer species at sensible distances. Over the chrono the 22” test rifle was producing 2937 fps, so only around 18 fps slower than quoted.

I cut some bullets up and found what I considered a pretty standard build in terms of jacket thickness etc. Despite how RWS describe the T-Mantel bullet, I would be very surprised if you were not getting good pass throughs on animals from muntjac to fallow.

At the price, which is very good, this 105-grain Geco load should be of great use to 243 Winchester users; especially if heavy bullets are your thing! Get a box and see if they suit your rifle…