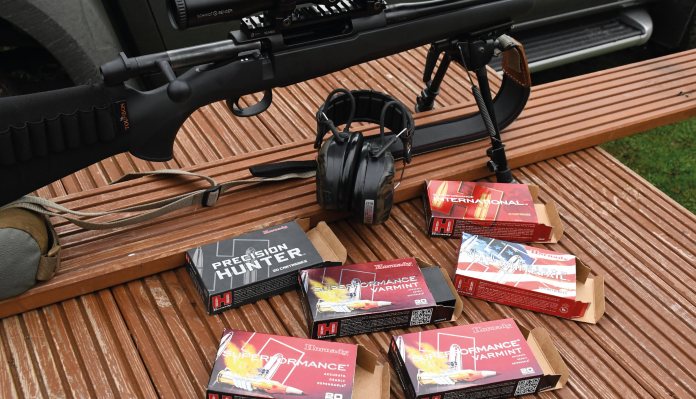 Ammunition selection can be a seemingly endless pursuit after the acquisition of a rifle and scope. Yet .243 Win, one of the most popular calibres in the UK, shows perhaps the broadest selection. This is because it is suitable for varmint and deer shooting. The purpose of this article is to take a look at what Hornady has to offer.

Speed is not everything and there is a balance to strike between pure muzzle velocity and the trade-off towards longer heavier, slower bullets that although initially demonstrating more curvature to their trajectory, have greater sectional density and higher ballistic coefficients (BC). Every bullet begins to slow down the instant it leaves the barrel and muzzle energy relies on the direct factor of mass and the squared value of speed. Bullets don’t lose weight in flight, but the speed loss, which in calibres like .243 is a significant proportion of energy, is immediately diminishing. Air resistance also calculates on the squared speed so double the speed, quadruple resistance. Think tortoise and hare, both show benefits but the overlap in capability is what you need to judge.

I use a 75-grain bullet for .243, as I think it offers me the best balance for trajectory and energy when foxing at night. An excellent balance of BC to get the best from the cartridge’s driving speed for best resistance to crosswinds at ranges where on foxes, a point-blank zeroing capability for fast fire is my preference.

For deer in daylight at ranges below 200m, I choose the 100-grain bullet for cross border legality, but more importantly, steadier expansion with less meat damage.

The likely onset of a lead ban forces many of us to consider the use of monometal bullets instead of the tried and tested copper jacket, lead core types we are used to. As a result, I have included the 80-grain Hornady GMX in the review.

All the ammunition was shot from the same Mauser M18 rifle with a 22”/560mm barrel. It was all done on the same day, with no scope alterations and no barrel cleaning. Call it a tough comparison to give real-world shooters an example of what they might expect with minimum preparation and limited opportunity.

The rifle was zeroed centrally on some 50mm red spots at 100m with the 80-grain GMX, no group was more than 40mm higher. Again, this is a starting point and it’s always worth cleaning a barrel and shooting multiple groups to test compatibility, yet here, all would have performed within effective hunting ranges perfectly well. Although the 90-grain group was a bit wayward, it would still pass DSC level 1 requirements.