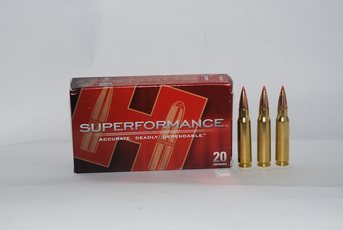 One of Hornady’s cleverer ideas was their original Light and Heavy Magnum series. This in essence offered calibres that were capable of more speed and energy but in a loading that did not increase pressures or felt recoil. Now discontinued they have moved the idea forward with their SuperFormance range, which is pretty much the same thing!

Hornady says: “Superformance ammunition is 100 to 200 fps faster than any conventional ammunition on the market today, and achieves this performance in every gun, without increases in felt recoil, muzzle blast, temperature sensitivity, fouling or loss of accuracy.” The effect is achieved by using special propellants and is a far more elegant and efficient approach than just packing a big case full of powder

I was sent some to test in 308 Winchester using their 150-grain GMX (non-lead) bullet with ballistic tip. They also offer this loading in SST (Super Shock Tip), BTHP (Boat Tail Hollow Point) and Interbond too.

Hornady says that from a 24” barrel this load is generating 2940fps/2878 ft/lbs at the muzzle, which is impressive as that’s near what a 150-grain 30-06 can do. However, I had a much harder task for it as not everyone uses a 24” tube with 22” being the norm. I tested it through the new Ruger Gunsite Scout rifle (European version) which at 18 ½” would really put it through the ringer. My reason was simple, as I was keen to see what sort of performance limitations this very short (for a 308) barrel would impose.

From the off I was not expecting to get anywhere near 2940 fps as the Scout gives away 5 ½” of barrel over the test tube. However, it occurred to me that the SuperFormance could be the solution to shorter barrels in terms of better performance. Parameters were established by using 150-grain PPU 308 and a top end reload with a Barnes 150-gain MRX with 44-grains of Vit N140.

The Superformance registered 2777fps/2568 ft/lbs, the PPU 2576 fps/2209 ft/lbs and the reload 2862 fps/2727 ft/lbs. In terms of recoil the GMX felt about the same as the PPU and was well behaved, but the GMX was full on and on checking the fired cases the primers were flattened, indicating that peak pressures had been reached if not exceeded! OK more speed and energy but at a price not worth paying.

Accuracy-wise the Superformance was keeping it under the inch at ¾” @ 100-yards, again pretty good from a short barrel. Overall this is a nice load and a good example of what this ammunition can practically offer. I have no doubt a more standard barrel length would up these figures considerably. But as it is the 18 ½” tube robs 163 fps/310 ft/lbs off the factory figure, but in what is a 308 carbine still give a very healthy 2500 ft/lbs of energy with no apparent physical or mechanical penalties, which is impressive.