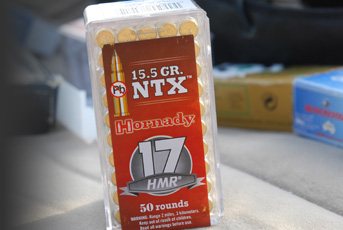 I love the 17HMR (Hornady Magnum Rimfire) and use the 17-grain V-MAX load for 99% of my rimfire work. So I was very interested when Hornady announced their new 15.5-grain NTX (non-toxic expanding), which addresses the growing non-lead bullet theory. However, I am unsure whether it’s a solution to a real or supposed threat to the environment, or a misguided sense of appeasement to market forces! The NTX uses a sintered core made of a mix of tungsten, copper, tin and iron formed under high pressure. Pretty much an alternative cored V-MAX! Recognition of this identical looking round is achieved by its brown plastic tip, as opposed to the red of the 17-grain load.

At my zero range of 100-yards for the 17-grain load the NTX only required a couple of clicks to get on point of aim and as before it was punching an easy ½”. If we have to have non-lead then this alternative cored approach seems ballistically superior to the monolithic hollow points, which I have found are not as accurate. Size perhaps stopped Hornady making a 17-grain NTX capable of doing 2500 fps.

So let’s compare the two loads at three ranges, I decided on 100-yards (zero) probably the average distance I shoot at, 140 (head shots maximum) and 180 (maximum effective). Figures indicate velocity in FPS and energy in Ft/Lbs. The V-MAX load shows significant advantages as can be seen. Playing devil’s advocate I ran the figures on the Eley Subsonic Xtra + using a 40-grain hollow point, which was very interesting; though it is in an entirely different class. But it does show the bullet weight V speed dilemma face by ammunition designers.

In field tests I found that the NTX bullet does not expand as well as the V-MAX. I mainly targeted larger hares and rabbits with body shots only and found unless the bullet connected with something tough or vital it tended to push through and do little peripheral damage. On smaller animals their lack of body mass showed the same thing. I can only conclude the core is harder than lead so resists expansion more due to the lower, down-range velocities. For me effective range for body shots is not much past 100-yards. At my maximum head shot range of 140/150-yards the V-MAX is still holding 102 ft/lbs of energy whereas the NTX is down to 70, however with this critical area it does the job just as well.

Hornady’s 17HMR NTX is definitely a compromise, as it’s trying to address a legal requirement, which seems to be growing in force for hunting. While at the same time compete with what is undoubtedly the most successful rimfire load/calibre since the 22 Long Rifle. It would be at is best out to 100-yards maximum as it’s flat shooting and hard hitting enough for rabbits and hares; given correct bullet placement! But it could push head shots a bit further…
However, one day we might all have to go non-lead and if so then Hornady has a solution already in production. I feel sure they will be continue to refine this - their first rimfire entry into this forced market place - and future product will be as effective as the lead-cored rounds we use today…

For: A non-lead alternative that might be required one day; let’s hope not

Against: Does not compare well ballistically or terminally to the 17-grain V-MAX load

Verdict: Currently not a lot of point for the UK 17HMR user, but proves the generic NTX design is ballistically superior than other monolithic, non-lead bullets