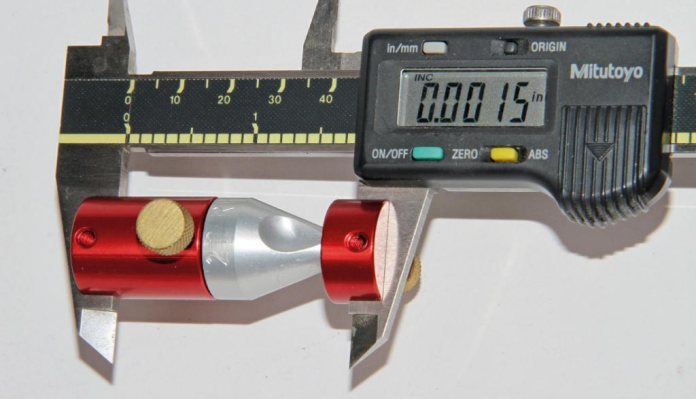 Sorting rimfire ammunition by rim thickness is a quick and easy procedure to add to your shooting prep regime. It provides rounds with uniform rim thicknesses that ultimately result in similar ignition qualities thus improving accuracy.

The Hornady Rimfire thickness gauge forms part of the Lock-N-Load series of reloading kit and is a cost-effective piece of equipment. It attaches to your measuring calipers and includes bushings for use with all .17 and .22 calibre rimfire ammo, except the newer .17 WSM.

There are two caliper fixtures/anvil bodies and two aluminium cartridge holders included in the kit as well as a lanyard.

Firstly, the lanyard is there to stop you from dropping the calipers and causing an accidental discharge of the rimfire ammunition. This is a typical USA safety thing, personally, it gets in the way so use it at your discretion. Be sensible in its use and do not force any rounds to be measured.

Simply open the jaws of your calipers and attach the shorter of the two anvil bodies to the travelling blade. These anvil bodies are red anodised aluminium and feature an attachment slot which locates in the caliper jaws. They are secured by tightening a knurled brass thumbscrew. Next, attach the other anvil body to the non-travelling jaw of the caliper and secure it in the same way.

Now you have to align both these pieces so that when the jaws of the caliper are closed, they align perfectly.

Simply close the jaws and loosen and re-align both anvils until the mating surface join square on. Then tighten the brass screws.

Now you can insert either the .22 or .17 cal aluminium body/cartridge holder into the larger of the two anvil bodies. It’s then held in place with another brass screw. To complete the setup, close the caliper jaws and zero the tool. My smaller body anvil kept loosening so keep an eye on it.

The use of the .22 rimfire bushing is ideal for .22 shorts, .22 Long, .22 Long Rifle and 17Mach 2. I have also used it for reduced load 22 rimfire rounds like CB and BB caps, which are notoriously inconsistent. The .17 rimfire bush is used for the .17 HMR as well as the 22 WMR, due to the matching body diameter.

With your box of ammunition, I write down the lot number taken off the ammo box as a reference and then use 3 or 4 labelled tins to segregate the different measured cartridges into. Now insert one round at a time into the larger bushing and close the anvil against the rim with a light closure. To ensure you get a true and consistent reading every time, it’s very important to use the same pressure each time and not to force the caliper jaws shut.

You can also set the caliper differently to zero against the rim of the cartridge with the jaws closed so that instead of writing down the actual rim thickness measurement, any variation is now shown as a variable measurement from that zero figure. It’s up to you how you measure. Make sure you sort all the same rim thicknesses into the same tins.

My primary tests were with a variety of differing .22 rimfire ammunition. I will sort some .17 HMR another time, as there was so many .22s I wanted to try out first.

I usually sort my .22 LR rim thicknesses using a Bald Eagle rimfire gauge. By adding a special adapter I can also measure .17 HMR ammo, but I was keen to see how the Hornady one would work. I normally get no more than a 5% increase in accuracy, although the variation between the velocities quite often halves!

I also really like the CCI CB long as these feed through most magazines and offer far better accuracy than the BB/CB caps. They offer lower noise and power for short range vermin but they can be a little inconsistent at times. The rim thickness was from 0.0380 to 0.0405” and accuracy at 20 yards was hovering around the 1” mark prior to sorting. This reduced to 0.85-1.0” with the sorted 0.0400 rims. Also, a drop down from a 24 FPS variation to 18 FPS average was observed.

Now the normal .22 LR fodder. I tried a few subsonic loadings as these represent a normal diet for any respectful vermin gun, HV ammo would work just as well no doubt.

The Eley subsonics were running from 0.0375 to 0.0380”, so pretty sweet, and shows why these rounds are always so consistent and accurate straight from the box. Sorting helped to decrease the variation in velocity but accuracy wise, it was not really noticeable, to be honest. Other subsonics, like CCI Segmented and Remington Subs, did benefit a bit from the process as the would-be ‘fliers’ caused by irregular ignition issues were filtered out.

I also sorted the SK Long Range Match ammo I use for long range shooting, and just like the Eley ammo, these rounds are so consistent anyway. I couldn’t really see any difference other than that the odd fliers were eliminated, a benefit in itself, I guess.

For about £40, dependent on the retailer, this Hornady Lock-N-Load Rimfire Thickness gauge is a great addition to anyone’s arsenal of accursing kit. It’s foolproof to use and does help sort out the wheat from the chaff, with regards to dodgy ammo.