Non Lead Ammunition Round Up Part 2 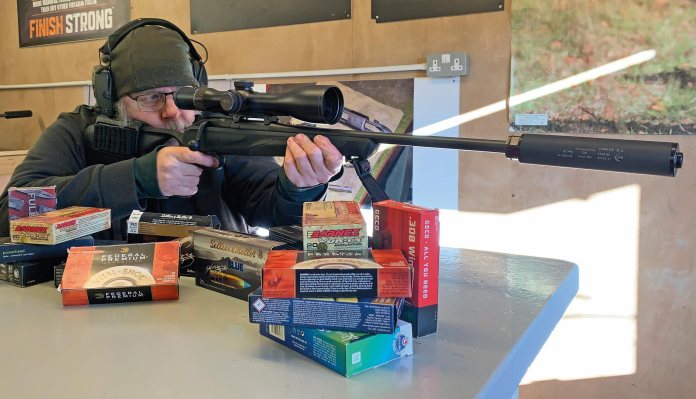 If you read Part 1 of non-lead (N-L), you will now be aware of what it’s all about. In Part 2, I will be taking a cross-section and testing them on the range. Over the years I have hunted with various types with some success on both boar and deer species.

A number of aspects became apparent, some guns don’t like N-L and shoot badly. The ‘hammer’- monolithic hollow point – types (MHPs) are velocity-sensitive and as speed drops off so does expansion. They also pass through a bit too well and with smaller species, I have noted the spent projectile ricocheting well behind the animal in some cases.

First-hand I have seen deer hit by a non-lead in the right place barely react to the shot and run on. Where a conventional lead-cored projectile would have dropped them. Speaking to experienced hunters and foresters confirms some of this and their comments as to the future are most illuminating. But I believe, it’s coming, and we shall have to embrace it.

What a lot we got

I rounded up 16 different makes of ammo and I picked .308 Win, as I felt it was the most representative calibre. I’d like to thank Frederic Hanner (MD) Blaser Group UK, who kindly lent me a 20” .308 barrel for my R8, along with a Blaser 4-20x50 scope. A bit short maybe, but these days people seem to be favouring more compact rifles, so it probably represented a good compromise length. I found a ballpark velocity reduction figure of 70-100 FPS seemed to be realistic for most of the loads when compared to a 22” tube. All shooting was done, sitting, supported off a bench at 100m.

The Naturalis was one of the early designs and shows a more rounded, MHP/BT ogive, which reduces the BC compared to the more ballistic shapes of other makes.

Most unusual is the fact the bullet literally mushrooms, with little to no sharp edges. I have not hunted with this load and did not manage to catch a bullet, which makes me think it has an extreme pass-through ability.

Full Boar uses their GMX bullet, which is an MHP/BT design based no doubt on the Barnes model. I have shot Muntjac and Roe with it and it works fine! Hornady literature shows the bullet at three different speeds to illustrate how the unavoidable velocity drop affects expansion. The slowest figure of 2000 FPS corresponds to 275 yards with just the nose starting to open up and energy of 1473 ft/lbs. I’m not saying it won’t kill, as if you poke a hole in an animal in the right place it will eventually die. But it does illustrate the issues surrounding using a stronger projectile of this type at extended ranges.

S&B offers two very different entries here; the 110-grain Blue MHP/BT is a Barnes-inspired design. Speed is very low for such a lightweight pill, making it small deer and fox legal only. Surprising is the group, at just over the inch, I thought it would shoot into a colander, given the performance of the Barnes 130-grainer. Again, if it were faster and in the right barrel it could be another S&B offers two very different loads; Blue and eXergy hot rod. The eXergy is a big thumper at 180-grains and surprisingly accurate, but again low on speed/energy as shown by the 200 yard figures. The bullet displays a rounded, aluminium tip/initiator and is reminiscent of an earlier Winchester design.

Barnes probably wrote the book on modern N-L bullets and their VOR-TX is a good example of a refined product. The 150-grain load strikes a good balance between speed and energy, which I have found in similar loads of the same weight. The 200 yard figure still retains 65 ft/lbs over the UK’s large deer energy limit of 1700 ft/lbs, which is impressive. The similar 130-grain variant again shows excellent figures and a flatter trajectory, always good. However, the lighter weight did not work in the R8’s barrel, with a massive GECO’s Star is their first non-lead and group, making it almost unusable. But pick the right rifling twist and it would be a real winner.

Eco Strike is another modern MHP/BT and at 150-grains shows some good ballistics even out to 200 yards. The bullet appears to have a tin jacket or is tin-washed over a copper alloy body.

Two offerings here both using Barnes bullets, the 165-grain TSX BT and 168-grain TTSXBT. Both as can be seen showed good 200 yard figures, with the Powerhead II pipping the original Powerhead in the accuracy department. Though not part of the test, Sako has now added a third option, the Blade. In .308 Win it offers a 162-grain MHP/BT and we are told they have improved its expansion characteristics to make it a better performer at all ranges. They quote a BC of 0.390 and a speed of 2674 FPS, hopefully, I will be getting hold of some.

Their basic loading is the 150-grain Copper. The bullet is similar to the MHP Barnes TSX and shows some good figures out to 200 yards with acceptable accuracy. Higher tech are their two Trophy Copper loads in 150 and 165-grains with the more common MHP/BT configuration, which is reflected by their higher BCs.

Three loads here. Standard is the 165-grain HIT (Barnes-type MHP/ BT) with a nickel-coated bullet and unusual hollow ballistic tip. Inside is a tapered chamber that is said to improve expansion. Unusually for this brand, all three velocities are quite near factory quotes, something their lead-cored ammo never seems to achieve. Short Rifle (SR) uses the same bullet at 150-grains and is built to give maximum efficiency in shorter barrels from 42-55cm, which as can be seen from the other 150-gram loads tested here, it does. Evo Green (all tin) is the only (hand grenade) type with a frangible ogive and a harder tin rear core, for a pass-through. It works well from my experience and all three show good 200 yard ballistics.

The majority of the loads tested were showing good figures out to 200 yards, with most touching or exceeding 1700 ft/lbs, and a few getting up to 1800+. This rather fits in with RWS’s general MRD figures of 188-200m. With the exception of the Barnes 130-grain VOR-TX, which was too light for the twist rate, you could expect 1.5” groups as a worst-case scenario from the others, which is still good enough. But other figures were impressive, with Hornady, GECO and others either going 0.5” or slightly over. So generally speaking, all fit for service, given effective range considerations

Price-wise, everything is more expensive. Picking a gun shop at random, I chose Federal as a brand and 130-grain .270 Win as a type. Power-Shok (jacketed soft tip) was £27 per 20 and Power-Shok Copper at £36. Sako’s Powerhead II in the same calibre brings that up to £48, so as usual, we pay for technology. But reloading is also an option with good results.

I don’t think that changing to non-lead will make any difference in terms of the environment, as I don’t think the ban on lead-cored ammo will extend to the military or target shooting, which consumes a lot more than we do. However, a chap who used to work for the Forestry Commission reckoned that to be successful in terms of humane and efficient kills on all deer species; a minimum calibre of .308 and maximum range of 200m would be required. OK, one opinion, but some very specific recommendations that I would tend to agree with.

Also, implementing a ban would be interesting. The government would have to give us a grace period to use up all our lead ammo and reloading bullets, or pay us for them, as they have done in the past. Equally, serious consideration would need to be given to the effectiveness of N-L alternatives, with a view to conditions on FACs and land. But technology moves apace, and I’d bet that future developments are going to make what we have now positively archaic and in 20-years time most hunters might not even know what lead bullets were!

I’d like to thank all those who contributed ammo and technical help.