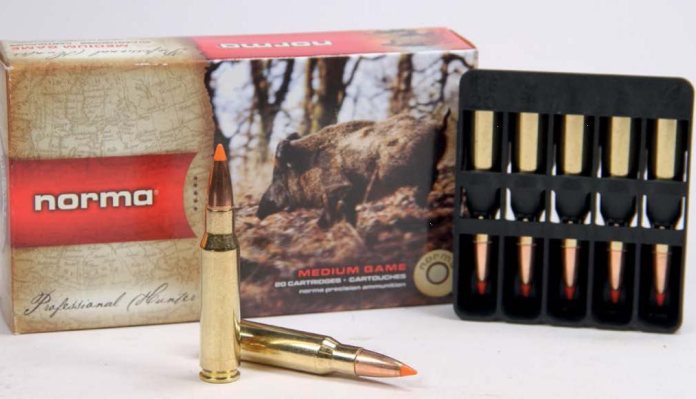 Norma and RWS ammunition have sterling reputations when it comes to producing accurate, high performance cartridges. Their production techniques and quality control are second to none. I started using Norma 150-grain soft points in my Tikka LSA 55 some 38 years ago and shot my first Roe buck with it.

Whereas people like a lighter bullet as it has more velocity and thus a flatter trajectory and of course less recoil, there are times when heavier is a better choice. Usually, this type is chosen for bigger game for a more controlled expansion and deeper penetration. Its sectional density relative to its calibre size ensures this, but I quite like to use it for the given calibre for deer species as it ensures less venison loss. You do need to be more specific on the aiming point, as you are less likely to have as much hydrostatic shock effect than a faster and more expansive type would.

You also have to consider over penetration and a safe back drop. But choosing the correct weight/construction can actually offer an effective bullet for many more deer species than one might think.

The Tip Strike is part of their medium game range and quotes; 2625 fps/2602 ft/ lbs, so nicely balanced velocity to energy. The ballistic coefficient (BC) is 0.454 with a 0.256 sectional density (SD). It like any other polymer-tipped bullet, but is more aimed at medium deer species for more controlled expansion, thus giving a good degree of penetration and energy release.

I used a Hornady run out tool to establish bullet concentricity - how far out of true it is to the axis of the case and bore. It showed a figure of 0.003” and importantly the tip section is perfectly square in the jacket. Weight averaged at 170.4-grains, with an overall length of 1.280” with a flat base construction and using the overall length (OAL) gauge showed from base to ogive was 0.5740” with a variation of less than 1%.

When sectioned you can see there is a small void where the Tip is seated in the jacket ahead of the lead core, but the side walls of cooper jacket are quite thick at the tip end and get progressively thicker towards the base. There is no partition or internal spur to secure the core to jacket, but in the tests it was bonded very well.

What’s in a name?

The Tip Strike, as its name suggests is designed for superior down range trajectories with its aerodynamic tip and also to facilitate initial expansion of the bullet jacket to mushroom out the front section. Dependent on velocity, jacket thickness, void depth and softness of lead core are all contributing factors in bullet performance.

The case too is good quality and only has a variation of the of 1.25-grains for the 164.4-grain weight. As we all know Norma brass is excellent for reloading so another bonus. Capacity was 42.4-grains of a small, short cut extruded powder.

The DK bullet shows a distinctive design. They are flat based with a long bearing surface of 0.5705” to the short/angled ogive and tip section, sometimes referred to as a cone point. There are two, deep cannelures which, serve to locate the case for seating and relieve the bearing surface area a little. The tip is well finished with a typical exposed lead point of 0.1195” diameter, so small with the lead core and filling the entire bullet without voids.

The inner structure shows a thick, jacketed, rear section to drive the bullet forward and keep integrity whilst the thinner front section of softer lead (rear core is harder) is designed to mushroom and expand quicker on impact. Important is the ‘Partition-like’, copper bridge that separates front and rear cores, this aids bonding and permits expansion and driving force at the same time.

Although the DK has a small lead tip exposed, the softer lead core at the front combined with the thinner front copper jacket section is still designed to expand quicker on impact and thus increasing the frontal area of the bullet. The case too was good quality, heavier than the Norma and only having a variation of 1.15-grains from its average 177.6-grains. Capacity was 43-grains of a small, short-cut, extruded powder, again, superb brass for reloading!

Firstly, both brands were very well packaged as with detailed notes and ballistics on the sides. Bullets are individually packed in two, 10-round sliders, which can be snapped into 5-round holders, very convenient for dropping in your pocket. Accuracy-wise I shot both loads in a variety of rifles with differing barrels lengths: Remington McMillan, Tikka LSA 55 and Sako A2.

In the ballistic media the bullet construction really showed through in the expansion and wound channel left. This is where you can tell if they are expanders, penetrators, or both, so you can make an educated guess then as to what type of game they are suitable for.

The Norma Tip Strike as expected despite its extra weight over the RWS expands the most due to the tipped design and slightly higher velocity. So, good controlled expansion, along the entire wound channel for maximum energy transfer.

The RWS with its lighter bullet but lower velocity, was definitely more of a penetrator. The DK’s partition is designed to expand and then drive deep in the target. Here, the gradual expansion of the soft lead core tip gave a more gradual wound channel, good retained weight hence good penetration. Either way the choice is yours.

I have used the RWS on Roe and Sika with very little venison wastage i.e., no nasty bruised hydrostatic shocked area around the entry hole. But bullet placement is still crucial and may mean a beast that runs several yards before dropping if the adrenalin is up. The Norma was used on Roe and CWD and produced instant drops on the classic heart lung shots, but a little more meat damage dependent if bone or ribs were hit. But both bullets being heavier than the normal 308 fodder still meant less overall venison loss.

Down range the difference between the two bullets is even more pronounced and this is reflected in the bigger difference in BC values. The Norma at 0.454 compared to the RWS 0.293 is far superior which, is reflected in the Norma’s slimmer line and aerodynamic i.e., wind slippery Tip Strike bullet compared to the RWS DK design. But up to 300 yards really there is only -14.3 to -17.8” drop difference (3.5”). But energy retention due to the Tip Strikes better BC is better at 300 yards with 1669 ft/lbs, compared to the RWS at the same range of 1147 ft/lbs. Wind drift: the Norma is far better at 300 yards at 7.4” deflection, whilst the RWS shifted 12.8”, both at 3 o’clock and 10 mph.

Both of these heavier .308 Win rounds are very well made and can be depended on to produce good accuracy and performance down range. If you fancy a lighter bullet weight version then RWS and Norma offer this too. I was very impressed and have used them with great success in the field and actually have a few boxes as back up in case I forget my reloads! Price £54.00 Per 20