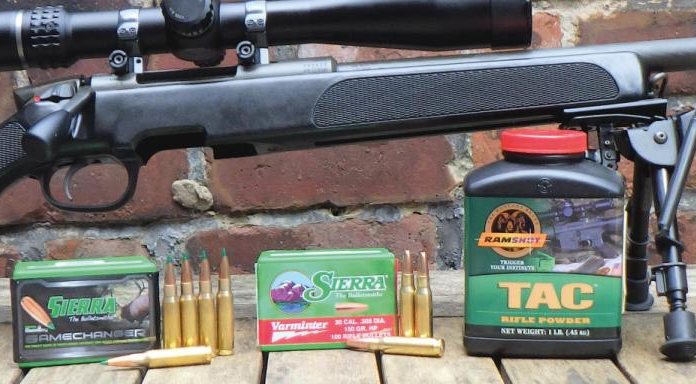 Sierra bullets are amongst the very best available and the range of types and weights is truly impressive. From bench-rest accuracy to super-efficient ‘knockdown power’ for the stalker, there is something for everyone. These are just a couple of their projectiles from their current range.

Although these bullets are towards the lighter end of the weight range for .308, they lack absolutely nothing in terms of accuracy and performance. They are also well priced, making them far more affordable than many rifle bullets. Relatively new to Sierra’s Varminter range in this weight, the 150-grain bullets are a basic hollow point design with a ‘crimped’ point and no ballistic tip or insert.

Being that much lighter than many game bullets in this calibre, they can be pushed at higher velocities and this contributes to what Sierra describe as ‘explosive expansion’. This smaller and lighter bullet is ideal for shooting foxes and is a great alternative to the heavier bullets you may be using for larger quarry. Sat on top of 45-grains of Ramshot TAC, these bullets were achieving 2600 FPS from a 26” barrel.

The Gamechangers are one of Sierra’s premium bullets that have brought together their match accuracy with tried and tested knock-down ability. They are somewhat more expensive than the Varminter range but you can immediately see that a lot has gone into the ‘high-tech’ build on these projectiles. Sierra has taken their Matchking bullets, reengineered them to include a large hollow point and added a transparent green tip to improve ballistic performance. The result is a very long bullet, with an excellent ballistic coefficient and top-end performance. Loaded over 41- grains of Ramshot TAC, these 180-grain bullets achieved an average muzzle velocity of 2450 FPS and grouped exceptionally well. Consistency with these particular bullets was the best that the Steyr SSG used for testing has ever achieved.

As you would expect from Sierra, both of these projectiles proved to be accurate and consistent. The heavier bullets suited the particular twist rate of the test rifle barrel better, which was expected, but both performed very well. More than acceptable for both stalking and target shooting. In the case of the Gamechanger, you are getting a match-quality bullet with all the enhanced expansion characteristics you might need for live quarry. Definitely worth giving a try.