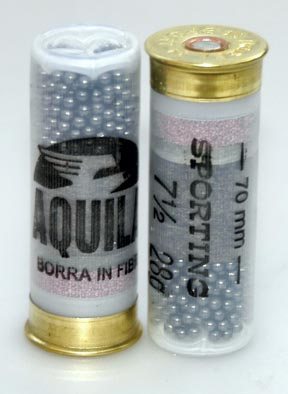 Nobody can avoid the rising price of lead; hence cartridges are escalating at what seems an alarming rate at times. But whilst some just bemoan the current predicament others have been busy sourcing performance lead that doesn’t cost the earth. Aquila T2 Sporting are imported into the UK by York Guns and retailing for just £3.10p per 25, they are fast becoming a serious alternative to the better known brands. They are also the recommended cartridge and chosen clubhouse load at Greystone SG.

Manufactured by Cheddite, a company better known for its supply of cartridge componentry, and used by some of the best names in the ammo business, the Aquila T2 is a superb example of their own efforts. Produced in Italy, these 28 gram loads are delivered in a strikingly colourful blue, red, green and yellow carton with all necessary information displayed on both the lid and base. Each of the twenty-five brass and translucent cartridges contained within are exactly 57mm long, inclusive of the ‘Nobel Sport’ stamped 7mm head. A tight, deep rolled six star crimp seals the case, with clear black script and logo providing easy identification when in the pocket or cartridge bag. Internally, an average of 27-72 grams or 341 of uniform 7½’s are separated from 1-44 grams of distinctive pink-red sand like propellant by a well seated over card and a dense 19mm fibrewad.

Chronographed at nine feet through a Marocchi A12 with ¼ choke, a mean average speed of 1,170 fps was registered with only a 14 fps variation. Similarly, patterned at thirty yards through the same restriction, 311 out of 341 shot contained or 92% patterned evenly within the 29” circle, 66% weighted towards the centre. No noticeable gaps were displayed, the whole being equal to many higher priced performance loads.

As more and more Sunday morning clay shoots and country fairs insist on fibrewads a case or two of these Aquila certainly won’t go amiss. Marketed as cheaper to buy, softer to shoot, whilst generating impressive end results, all I can say is that I agree on all three points. Verified by test figures and patterning percentages, the T2 Sporting rounds proved their worth around 50 of Greystone’s ESP birds and three rounds of Bleasdale’s charity flyers.

The kills were crisp and clean, the speed being equal to the supposedly more potent loads; at no time did I feel that I was shooting what are inherently budget or medium grade cartridges. Bought by the thousand these Aquila’s will work out even slightly cheaper, the monies saved making the usual contribution towards other shooting expenses whilst every aspect of their performance should play no small part in adding to your number of class wins and placements.