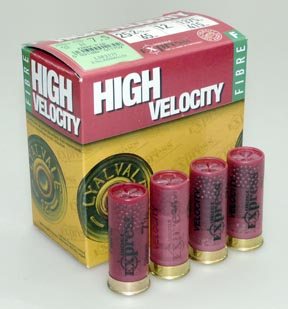 This might at first seem to be an eclectic selection of cartridges related only by the fact they’re all part of Lyalvale Express’ High Velocity range. Teamed together by virtue of their performance and the fact all four are some of the softest shooting loads on the market, any and all are ideally suited to beginners, recoil sensitive shooters and those looking for top performance ammo for the various Olympic disciplines.

Presented in identical red and orange ‘High Velocity’ emblazoned cartons, all four 7½ shot size cartridges utilise the same red translucent plastic Cheddite case. Exactly 52mm in length inclusive of the short 7mm head and precise six – point crimp, construction internally and externally is identical, the only difference being the extended legs of the 21g plaswad. Each of the test samples was accurately filled with well formed, high antimony shot, 23.3g in the 24s, 20.4g in the 21s and bang on 28g in the 28s.

Pattern wise, ¼ choke at 30 yards through a Marocchi A12 once again confirmed the fact that lower load rounds have the ability to achieve the desired results, 93% of the 24g’s shot evenly distributed across the 30” pattern plate, the 21 plas and fibre generating 89% and 81%, the Magnasonic 86% producing similarly well distributed patterns.

Taken in order of performance and general usage the 24 gram is the most ‘all round’ of the four. Generating a mean average observed speed of 1,131 fps; this round offers both trap and sporting performance, a top class ability to break clays at maximum distances all incorporated into a high end competition cartridge with next to no perceptible recoil.

Likewise, both 21 grams offer neigh on identical speeds of 1,231 fps for the plaswad, the fibre 1,191 fps along with a capability to demonstrate kills both close in and at distances far in excess of expectations. If any form of adaptation is required its that whilst the obvious environmental reduction in lead is beneficial, a marginal increase in choke may be preferred for longer birds to concentrate the decreased number of pellet together in a more condensed pattern, so reducing all fibrewads propensity for quicker, earlier spreads (unlike plaswads).

Lastly, the 28 gram Magnasonic, a cartridge designed primarily for corporate use. Offering shooters what could be referred to as a full charge of shot; the Magnasonic’s consistent 949 fps mean average observed speed does little to reflect the round’s physical capacity to deliver when and where needed, combined with recoil levels akin to that of an air powered weapon. If the Magnasonic had a drawback it’s the choice of shotgun required. It goes without saying this load won’t cycle a semi-auto whilst certain inertia operated double–barrelled guns won’t switch over, so insignificant is the generated or perceived recoil.

Apart from their obvious advantages, all four also offer an audible reduction in noise, another significant plus in respect of grounds that maybe suffering from potential noise pollution problems, along with the obvious advantage of a performance load for older, short chambered guns. All these Express cartridges offer the shooter the opportunity of full familiarisation and flexibility based around a single load.