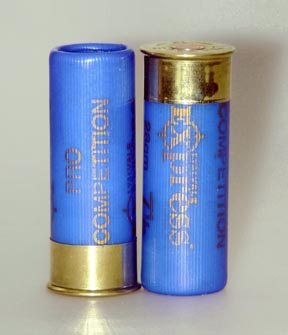 As the squeeze of the credit crunch bites, so does your average shooter’s search for more financially effective ammunition. But like many who shoot competition, constantly switching between cartridges isn’t an option they choose to make, variations in performance often making a significant difference. Equally, many cheaper loads either don’t produce constant patterns or can often incorporate some noticeable, uncomfortable recoil.

Noted for their Supreme and World Cup ammunition, it’s Lyalvale Express’ original Pro Comp cartridges that are once again coming to the fore. Available in a full range of shot sizes with the choice of both plas and fibre wads, the Pro Comp has undergone mild revision combined with Express’ new look packaging, if only to bring it’s aesthetic appearance more up to date.

The cartridge chosen for review is regarded by most to be the one with the most universal interest. A plaswad 7½, this Pro Comp is as likely to appeal to the Trap shooter as it is the general, all round sporting shot. Delivered in a purple and blue carton, each cartridge utilises a blue Cheddite case exactly 57mm long overlaid with gold script. Where one of the differences is now apparent is that the brass head has been marginally deepened to 12mm, the extended head improving both looks and ease of extraction.

Internally, 27.05 grams or approximately 351 pellets of 7½’s reside in a deep, one piece plaswad with honeycomb cushioning, which in turn sits above 1.38 grams of Express’ familiar square cut propellant. This is all held in place by a tight, six point crimp, the whole effect being one of quality without excess.

On the range, using our usual Marocchi A12 ammo test gun with ½ choke, the usual two shot strings of five registered a mean average speed of 1,223 fps when chronographed at ten feet. A ¼ choke patterning at 30 yards generated an extremely even distribution that contained 325 pellets or 93% of cartridge contents.

Shot over both DTL and ESP, the 7½ Pro Comp proved itself ideal for both first and second barrel shots although a Pro Comp 8 in the first would prove a more prudent combination. Shot over a hundred of Rishton SG’s sporting and compact birds, the Pro Comp once again proved its worth. Maybe not quite as smooth as their higher end rounds, the short, sharp recoil each Pro Comp generated did highlight the fact that this particular cartridge is probably more suited to either heavier shotguns or for those who value quality of kills over softness.

Currently the chosen load of the new Lottery Knockout Shooting competitions (for those wishing to conform to the new event’s standards), where the Pro Comp wins out is that its consistency is unquestionable with only a 20 fps variation in speed. Combine this with the average cost of £4.25p per box or £160 a thousand, and Express’ Pro Comp starts to make even more sense for the dedicated competition shooter looking to save a few pounds without sacrificing performance.