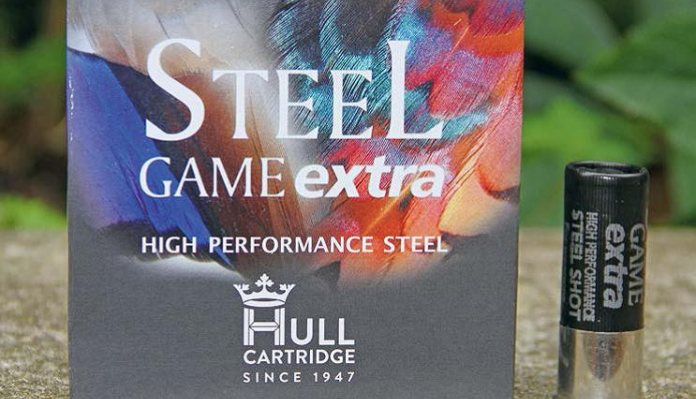 Hull Cartridge Company are proud of their ‘By appointment to H.M the Queen’ status and this is due to their quality of manufacture, consistency and the performance of Hull cartridges for all forms of clay, game and sporting use. They are famous for their Superfast Pigeon loads as well as numerous game loads, such as High Pheasant, High Pheasant Extra, Imperial Game and Driven Grouse.

Hull also make some great steel loads in the guise of their Steel Game Extra, on test today. These cartridges are ideal for lead phobic environments and offer very good performance to make up for the lighter steel shot compared to the traditionally heavier lead pellets. Being part of the Extreme cartridge range, these Steel Game Extra are high-performance steel loads and thus must be used in guns proofed for the higher pressure loads.

Visually, the Steel Game Extra is a very striking cartridge, with its black plastic casing and silver lettering. It measures 70mm in length and includes a high, 22mm nickel finished head. They use the term ‘bi-axially orientated’, which basically means the cartridge is straight and perfectly round, so will chamber flawlessly. It also sensibly warns of 1320bar guns only usage, and all cases contain the CX range of primers, which are acknowledged as a really reliable and consistent ignition system for shotgun propellants.

Propulsion is via specially formulated single base powders in terms of burn rate, pressure and velocity, which also offer good storage tolerances with regard to a range of temperatures and humidity. Capable of maximum performance with minimum pressure, this loading produces velocities of 1410 FPS at the muzzle and at 50 yards it is still travelling at 591 FPS. Remember, steel shot patterns are tighter than lead patterns, due to less pellet deformation, so a recommended maximum of ½ choke must not be exceeded.

Hull use an all-plastic wad system that contains all the pellets, avoiding contact with the barrel with three leaves that part after leaving the choke to release the shot. It must work as the shot patterns showed no clumping of shot and good density too. The specially designed compression stage of the plastic wad ensures maximum comfort /less felt recoil for the shooter, while still maintaining optimal velocity.

The shot is annealed so conforms to European CIP, SAAMI and USA regulations, which makes it still the most affordable non-toxic alternative. With this 32-gram loading you have approximately 179 Fe3 pellets per cartridge, so let’s see how they perform on the boards.

I have used steel cartridges in many test guns and will include some of the data here, but the primary results come from using a Benelli Supa Nova fitted with a ¼ and ½ choke and shot at pattern boards set at 30 yards.

Sometimes, if you shoot steel while using a tighter choke, like ½, which is the maximum for most steel loads due to the hardness of the steel pellets, you will find some patterns can be blown. In other words, the steel shot bounces off each other through the choke section of the barrel and cause a wider pattern than a ¼ choke would. But this is largely due to the type of wadding used.

These Steel Game Extra, with the plastic wad system, proved to behave very much like a traditional lead shot load would, which was nice to see. It means the steel shot is well protected down the barrel.

First up was the ¼ choke pattern board, and it had a total of 122 pellet strikes within the 30” circle. There were 38 inner hits and 84 outer hits, with an upward bias to the pattern. This is typical of steel loads due to the lighter steel pellets/velocity characteristics. Still a good coverage really for the larger, Fe shot size.

The ½ choke offering did a lot better, with a total of 162 pellets on the board, an increase of 44 Fe3 pellet strikes compared to the ¼ choke. We had nearly double in the centre 15” sectors, with 64 pellet hits and the remaining 98 pellets distributed around the periphery. Still a slight upward bias to the pattern but a better distribution of shot overall and lots of pellets in the centre, where you are aiming, hopefully!

Recoil was actually was not too bad at all, noticeable and brisk but really very manageable, like any other 32-gram loading.

Next up was my 12-gauge Browning B725 fitted with ½ choke. The pattern on the board showed an unbelievable total even split between inner and outer sectors. So, 73 pellets per sector for a total of 146 pellets strikes.

If you want to step things up a little, then the Solway Steel load from Hull uses 36-gram loadings in Fe1, 3 and 4 shot, but I will test these fully later.

No surprises really, this Hull Steel Game Extra loading is a very capable performer, with good consistent velocities and remarkably clean bores after the tests too. Recoil was very manageable with its 32-gram loading, so OK for sustained use or a quick second shot, without losing too much of the sight picture. The patterns speak for themselves, slightly high, that’s steel for you, but no blown patterns and good with ¼ or ½ chokes, and nice density of shot pattern and coverage for a humane shot. Priced well and widely available, the Steel Game Extra loads in any shot size are a good steel pellet load for game, pigeon or vermin shooting.