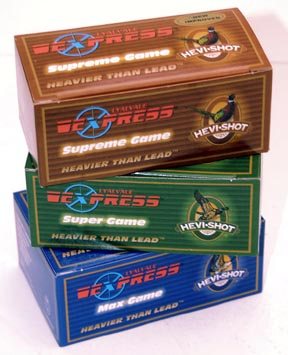 It still surprises me to find that there are shooters who still don’t or won’t realise that to shoot on the foreshore or undertake any form of wildfowling, by law you must use non – toxic shot. One of the most used excuses for the continued use of lead is that ‘my gun isn’t proofed for steel’, the other reason being that non-toxic cartridges are seriously expensive.

Well, although not cheap by anyone’s standards, Hevi-Shot cartridges can be used in any nitro proofed gun, providing the barrels are not choked tighter than ½ and that the correct cartridge to chamber length is adhered to, i.e. 70mm or a 2¾” round used in the chamber of the same length.  Non-toxic shot doesn’t compress like lead, so the potential damage if shot through an over tight choke could prove irreparable, therefore it requires a long, all encompassing wad that travels the length of the bore like a sabot round until it leaves the muzzle.

All three loads are contained within a substantial, clearly printed Cheddite plastic case, the 26 gram and 34 gram both bright red, the 31 gram the familiar shade of Express blue. Each case exhibits a tight, deep roll and snug six-point crimp, all three sharing an identical 16mm deep brass Lyalvale stamped head.

Internally, the 26, 31 and 34 gram loads contain an average of 136, 164 and 144 pieces of shot respectively. The barrel shaped moulded shot is an amalgamation on tungsten, nickel and iron coated in a PTFE style lubricant that combats any form of potential dampness, whilst allowing each piece of shot to remain fully independent of its near neighbours. All three plaswads are deep cupped with four long splits and a honeycombed cushion.

The propellant is A136 Vectan, the 2½” using the standard square cut variety whereas the larger 2¾” and 3” loads utilise a thicker cut version of the same flake. This thicker flake evens out the burn rate, so refining the overall combustion progression which in turn serves to generate a more controlled, uniform shot pattern.

Chronographed at the usual ten feet through a standard Remington 870 with ¼ choke, the 26, 31 and 34 gram loads generated mean average observed individual speeds of 1,301, 1,164 and 1,282 fps with a maximum variation of 19 fps with the 26 gram’s and a near incredible 8 fps from the 34 gram loads. Similarly, when patterned at 30 yards against a standard Lyalvale Express patterning card, 92% of 26 gram load was contained within the 29” circle, 83% of the 31 gram, the 34 gram load throwing 87% in the vital area. Equally, 78%, 65% and 66% of shot spread was within the inner 15” indicating a slightly centralised pattern, highly beneficial to this type of load.

The 34 gram 3’s pack a recoil punch but if geese are your intended quarry then these are what you need. For duck and other normal game, the 26 gram 5’s and 31 gram 3’s, 4’s or 5’s will perform in the exact same way as your more familiar lead loaded cartridges. All three loads performed admirably well on a variety of targets, but the tightness of pattern requires the shooter to sharpen their accuracy and take more considered shots if effective kills are to be achieved. Keep these things in mind and not only will Hevi-Shot keep you legal, it’ll improve your shooting no end.