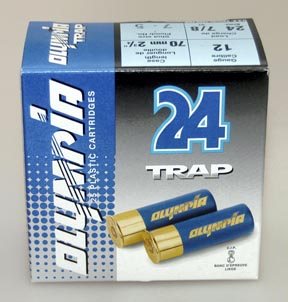 A few months ago we took a look at the reintroduced Olympia cartridges from Cyprus. Typical of both the country’s and this manufacturer’s high performance ammunition, Olympia are once again set to make their mark at all levels of shooting; presentation, price and on the range results proving to be an attractive combination. But whilst the 28 gram loads go on to find general acceptance, the nucleus of Olympic discipline specific shooters still grows, many of these 24 gram maximum, these Olympia 24 Trap cartridges aimed fair and square at this growing sector.

Imported by Mid Wales SG, like the rest of the Olympia range, the 24 Trap is delivered in distinctly individual, informative carton. Each blue plastic case with silver overlaid printing is an exact 56mm in length that incorporates the 12mm head and a deep set uniform six point crimp. Internally, an average of 23-21 grams or 286 perfectly spherical 7½’s are contained within what would appear to be Olympia’s rather unusual plaswad in that the slightly shorter shot cup sits atop a diametrically opposed cushion and a deep stippled over-powder cup. Beneath that, a mean average of 1-17 grams of circular cut, flat green, fast burn propellant exhibits precision production with no hint of clogging.

Fired from a Marocchi A12, the chronograph showed average speeds of 1,217 fps through ½ choke at ten feet, whilst 30 yard patterning through ¼ choke generated an 88% pellet count. One aspect that was at once noticeable was the central bias, over 50% of the total number concentrated towards the central 15” of the plate, indicating the typical 24 gram need for increased accuracy.

Shot over two lines of DTL at Coniston SG, by virtue of the fact there’s four grams less shot; the need for tighter choking soon became apparent. Whilst ½ was still more or less acceptable for the first barrel, to hold the pattern for longer (for second-barrel shots) I found full choke was the minimum to produce consistent second-barrel kills. What was immediately noticeable though was an overwhelming lack of recoil, especially when shot through an average weight trap gun. Equally, first barrel performance was more than up to standard, all kills being crisp and clean.

For what it’s worth, my own opinion of the 24 Trap is that in essence it serves two purposes. Generating almost imperceptible recoil, as a starter load or for the more sensitive shooter, the 24 Trap combines excellent performance with comfort even over extended or intense periods of shooting. Similarly, for those looking to move into the more refined disciplines that specify 24 gram loads only, Olympia’s 24 Trap is as near as you’ll find to the ideal practice load.

Whilst I know two competition shooters who use the 24 Trap exclusively, I personally found the increase in choke not especially to my style or liking, second barrel or long – range kills being somewhat indifferent. Have no doubt whatsoever that even at fifty yards the clay will break and that’s all that counts. However, like most trap shooters, I look for comprehensive, no dispute hits.