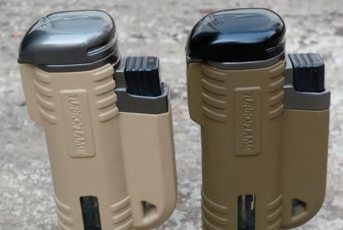 For those who don’t know, Turboflame specialise in high quality lighters that are aimed at outdoorsman, military or emergency services personnel and anybody that needs more than just a normal lighter.

The new Turboflame Twin Laser Jet V Flame itself is not much larger than a traditional lighter but it is a little bit heavier weighing in at 90 grams, not that this worried me as the lighter feels very robust and solid, giving a very good first impression.

If you flip up the protective lid, you immediately notice the two burners that give this lighter its name; both are angled slightly inwards in order to create the “V Flame”. The benefits of this are obvious as it allows the user to direct the heat of two flames to a focused point creating temperatures of up to 1300 degrees Celsius. To put this in perspective I boiled a tablespoon of water in seconds and I don’t think I need to give anyone a lesson in Thermodynamics to explain why that’s impressive.

This clever design/setup comes with many benefits. The flames created by the twin burners are wind resistant, allowing the lighter to be used in high winds and extreme conditions thus making it perfect for military/survival applications.

The example that springs to mind for me is that the V Flame excels at lighting hexi blocks which are difficult to light in even the slightest of breezes!

The two laser jet flames allow the lighter to be used at any angle and direct the heat to a single point, delivering an intense powerful flame that is both wind resistant and accurate. This makes the tasks such as shrinking wire joints, patching fibreglass, soldering, sealing rope etc., a lot easier.

The coating that covers the lighter itself feels ‘rubberised’ and offers a very grippy surface. The unit itself is constructed of zinc alloy, making it weighty but tough enough to survive in the environments most of its users will be using it in. Other handy features are a lanyard attachment point and a clear fuel window in order to monitor fuel levels.

There are a couple of tips for anyone thinking of getting one of these. It has been found that the lighter works best when kept in on your person (i.e. in an inside pocket) that minimises exposure to the elements. The reason for this being that the gas works better when warmer and the lighter performs more efficiently. The second tip is to bleed the gas reservoir completely before refilling the lighter, and finally when you first get the lighter make sure you turn the gas flow up at the base of the lighter as it is set to low for safety reasons in transit.

When using any Turboflame lighter it is recommended that only the best fuels (Colibri, Newport etc) are used as the cheaper ones can clog the catalyser with carbon, which could cause the lighter to malfunction. The use of the correct fuel means the flame burns very cleanly so that it does not scorch or carbonise equipment.

Available in Matte Olive and Desert Tan, the Turboflame Twin Laser Jet V Flame lighter represents good value with an RRP of just £14.99 it and I have no doubt that it will give years of service, but just in case… it comes with a 5year warranty as well! For more information contact Turboflame on 0161 428 1077 or visitwww.turboflame.co.uk