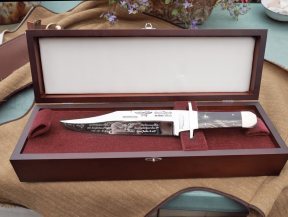 The names of Joseph Rodgers, George Wostenholm and George Ibberson have been in business since the 1800s and are instantly recognisable to knife enthusiasts all over the world, and now they are part of Sheffield’s family owned Egginton Group, the company behind Sheffield Collectable Knives.

I’ve been looking forward to getting my hands on one of the new Sheffield Collectable Knives range and was particularly pleased when they sent me the 10 inch I*XL Wostenholm American’s Pride Bowie Knife with Buffalo Handle.
I’ll say right from the start that this review will treat the American’s Pride Bowie as a collectable/display knife which for the most part is exactly what it is.

Most people will be aware that the original Bowie knife was made famous by the exploits and adventures of its owner – and some would say creator – 19th century American frontiersman James Bowie. His fame came in particular from a bloody and lethal brawl known as the Sandbar Duel and his reported exploits against Indians, fighting first with the Mexicans then against them and finally his heroic death defending the Alamo and helping to assure the independence of Texas.

Public demand for Bowie-style knives was met with great enthusiasm by American blacksmiths and, in addition, many thousands of knives were supplied to the American market from Europe. The Sheffield cutlery industry in particular was quick to exploit this fashion for large knives, and it is said that James Bowie himself placed an order for 12 knives from George Wostenholm & Son Ltd. and there is (or was) a commemorative knife from this Sheffield manufacturer on show at the Alamo museum, but it was made long after Bowie’s death. The upshot of all this is that the Bowie is probably the most recognised ‘named’ knife in the world.
American’s Pride

The 10” I*XL Wostenholm American’s Pride Bowie Knife, as its name suggests, has a 10 inch blade in the traditional Bowie clip point style. The blade is coated with a protectant (they use and recommend Tuf Cloth) – full care instructions are included in the comprehensive booklet which accompanies the knife.

The materials used for the knife are designed to be authentic and in keeping with the great Wostenholm Bowies of the 1800s, whilst bearing in mind advances in material technology. This means that the blade steel for example, which is a high-quality carbon steel, hardened and tempered to 51-54°C, is made in a way which makes it of a superior quality to the often fairly crude file available in the 1800s. Sheffield Collectables stick to using carbon steel rather than stainless steel because it is in keeping with the traditional nature of the range.

The highly decorated blade of the Americans Pride Bowie shows two marking techniques. The blade flat and tang are die stamped with a number of Wostenholm marks and the ground area is deep-acid etched with various 1800’s mottos and trademarks. These markings are authentic and taken from Wostenholm company archives.

The tradional ‘coffin’ style handle has scales that are made from buffalo horn which is polished and shaped by hand to reveal the material’s natural shades. The handle is finished at one end by a cross-guard and end-caps which, along with the linings and pin, are made from Nickel Silver (sometimes known as German Silver), which was widely used by Wostenholm and the other great Sheffield Knife makers of the 1800s.

This full tang design knife is substantial with a length of just over 14 inches (36cm) and a massive spine thickness of 9mm, while the weight is a hefty 1lbs 14.75oz (0.87k). All knives in the collection are uniquely numbered and supplied with a corresponding certificate of authenticity and a hard-back history of the companies and products. The knife is supplied as standard in a quality card box but a handsome felt lined and fitted Wood Presentation Case is available as an optional extra. A tan Leather Belt Sheath with press studded frog and security strap is also available as an optional purchase if required.