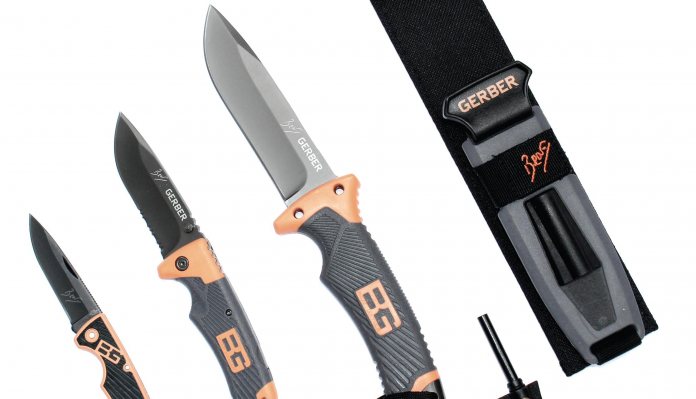 Switch on the TV and we’re seemingly inundated with programmes berating us for being cosseted by the luxuries of modern living! ‘The Island’ with Bear Grylls (BG) certainly proved that. However, he is doing a fine personal PR job – especially when he showed us what it takes to join the French Foreign Legion! If you’ve seen both, the first was tough, the latter – nigh on impossible. Without doubt he is the real deal unlike certain other so-called experts in survival. That long winded introduction brings me to say I feel Gerber’s BG endorsed products will now be perceived in a whole new light by many who might have overlooked them in the past.

Also Gerber has recently launched a few new additions to their BG Survival Range of what is already a comprehensive selection of blades and tools. First up is the Compact II Folder. You could say a next generation of the original Compact knife but it bears more in common with what is the Compact Scout Drop Point Serrated. However, only in part as the previously mentioned is a fixed blade combined edge (plain/serrated) build while the Compact II is a drop point Fine Edge folder and even when deployed is slightly larger yet slimmer in profile.

This handy knife measures 3.5” closed with an overall length of 6.1” with the 2.6” blade deployed and weighs a mere 1oz. The lock-back mechanism is secure and allows for equally easy closure, even while wearing gloves. It also has a lanyard hole and features a more robust handle than the original with rubber over-mold and a prominent finger choil offering a sure grip in all-conditions! The rear of the fine edge 420HC steel blade has a lengthy section of jimping at the rear for added purchase and easily opens with a well-sized thumb nick. The man himself is so pleased with the latest blade he rates it as his ‘new choice for a back-up survival knife…’

Although not a new edition, the Scout Drop Point, Part Serrated folding lock back has been slightly modified since I first tested it. It now measures 4” closed with an overall length of 7.3” with the 3.63” blade deployed and weighs 2.54oz and is another tough and functional design. Although there’s no thumb stop, the top ridging extends from the handle along the spine of the blade to end just forward of the dual thumb studs that are ideally positioned for one-handed opening. A generous length of ‘jimping’ gives a very secure hold for fine work. A useful inclusion is the metal pocket/belt clip and of equal importance isn’t felt when held and used. To sum it up - this is a knife you’ll often reach for when undertaking a myriad of field tasks.

In 2011 the original BG Ultimate Knife was the best-selling knife in the world – fact! Hardly surprising then that Gerber relented to overwhelming requests for a non-serrated version. Using the same high carbon, stainless steel drop-point blade and texturized rubber handle this is a very tough and rugged fixed blade. Housed in a nylon and hard rubber military grade sheath, with a diamond-coated knife sharpener, emergency whistle and a fire starter are all integrated into the kit.

Measuring 10” overall and weighing 11.2oz, the 4.8” drop point blade is manufactured from full fine edge 7Crl7Mov high carbon steel, giving it a high level of strength and edge retention. There’s also a striker notch incorporated into the back of the blade for use with the Ferrocerium rod (fire starter) – the latter locks into the sheath at the lower front section.

The Nylon sheath is lightweight, military grade, mildew resistant and the diamond sharpener is integrated cleverly into the build and is found on the back of the hard rubber section accessed by unfastening the lower Velcro fasten strap allowing the ‘sheath’ to articulate outwards to show the reverse. Ideal for ‘on the go’ sharpening.
The ergonomically textured rubber grip handle with its generously sized finger choil and serrated edge thumb stop is equally well featured offering a high level of comfort and grip. There’s a stainless steel pommel at the base of the handle for hammering and an emergency whistle is integrated into the lanyard cord.