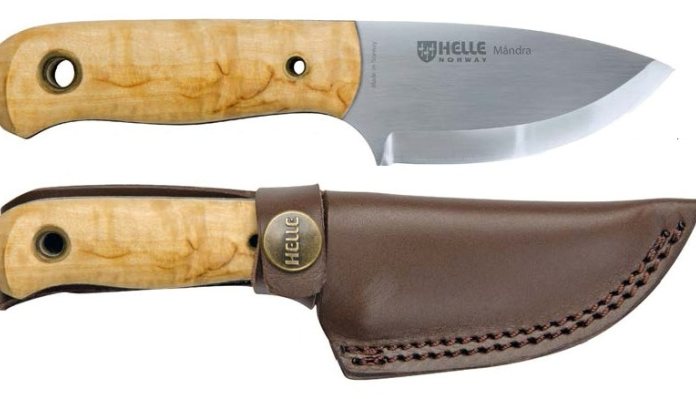 Norwegian knife manufacturer, Helle is one of the most highly regarded producers of handcrafted blades. In the past, they’ve worked on new designs in collaboration with well-known survivalist expert, Les Stroud. In fact, the Mandra is the third knife developed in collaboration with Les and also the smallest in the collection.

Mr Stroud has had some diverse careers because as well as being creator, director, filmmaker, cameraman and host of his own show named Survivorman, he’s also the Canadian Chief Scout. Interestingly, less known is that he’s also an ardent and accomplished musician and has worked in the music industry in a professional capacity, plus is also considered an exceptional blues harmonica player.

The collaboration between Les Stroud and Helle goes back more than 10 years.

The Mandra was developed during the spring of 2014 to accompany Les during his time living off the land in the Alps in Romania (Mandra means ‘proud’ in Romanian, hence the name). It was here he was joined by outdoor enthusiast, Anders (who’s also one of the head honchos at Helle), where the knife was rigorously tested.

The triple laminate stainless steel drop point blade has a deep belly and measures 69mm with a 2.6mm spine thickness. A tough, fulltang blade that’ll cope with difficult tasks and as it weighs in at 70-grams, it affords a nice balance for handling and dexterity.

However, the handle only measures 80mm, so in comparison to the blade length, it is rather short for it to be used for hacking, but that’s not what it has been designed for. The highly attractive and ergonomic curly birch handle has finger contouring allowing it to afford a full, four-finger hold or for those with large hands, a secure, three-finger grip. Such is the design of the blade, it incorporates a forward finger guard to avoid slippage, which has a nice curve into which your forefinger securely nestles up against.

As you’d expect of a Helle fixed blade knife, it comes with a tough genuine leather sheath with a press stud fasten securing strap and top position belt loop. Some term the Mandra as a neck knife, due to its compact dimensions, as it comes with a long leather lanyard. When worn like this, you thread the lanyard through the belt loop and tie the leather cordage around the neck. Handy when on the move cutting berries and the like or when foraging.

The Helle Mandra isn’t a general-purpose, heavyduty camp knife but it is not meant to be. It will make kindling, is useful for most cutting and food prep duties and is an excellent skinning knife. I highlight the latter due to the incredible blade sharpness, superb edge retention, plus the blade’s deep belly. A small knife such as this is often considered to be more versatile and when it comes to the Mandra, this proves to be very true.