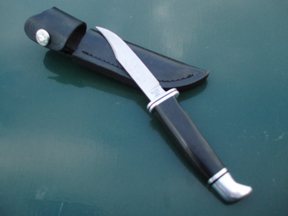 Finding a supreme rabbiting knife is not an easy task, I should know, over the last twenty years operating as a busy ferreter I have tried a large number of knives, some of them very expensive, and so far I have never been fully satisfied. So for the whole of this rabbit season I have been trying out a whole bunch of knives to see if I could find the perfect knife for rabbit work. Only two knives really stood out and they were both from the world famous Buck knife manufactures.

Buck is a family firm with over one hundred years of experience crafting hunting knives. In a company that believes that God is the ‘Senior Partner’ it’s not surprising that some of their work could be considered as ‘inspired’. Buck produce a level of craftsmanship that places the firm at the very top of the knife manufacturing tree.

The features I am looking for in a rabbiting knife are;
* A blade no more than 4 inches in length
* A very, very fine point on a thin blade
* A razor sharp stainless steel blade with the ability to retain its edge
* A tactile handle that does not slip when wet with blood, water or mud

Here are the two Buck knives that met the criteria;

This sheath knife has a 4in clip point blade, and is one of the thinnest blades you will find anywhere. It all has one of the finest points thanks to Edge 2x patented technology, which enables Buck to produce knife blades that are thin and flat yet strong. The blade is made from 420HC which is a high carbon steel alloy mix with a particularly high level of corrosion resistance coupled with good edge retention, yet easy to re-sharpen when necessary. I have used the Woodsman hard for six months solid in the field (and in the larder) on dozens of rabbits and the blade is still razor sharp, requiring just a few touches with an Arkansas honing stone to keep it in shape. They say Buck knives start sharper and stay sharper for longer, and I for one believe it. A very sharp fine point is one of the most important features in a rabbiting knife and the Woodsman will not be beaten in this respect, the point being almost needle-like.

The handle is also well crafted, and is made from Phenolic… whatever that may be (* see Editor’s note below). Nevertheless this handle is incredibly tough and scratch resistant, and no matter how wet or greasy it gets it does not slip in the hand, which was a surprise because its shiny smooth appearance looks as slippery as an eel, but looks in this case are deceiving. The butt and guard are aluminium and finish the knife of a treat.

The Woodsman’s sheath is like the rest of the knife; designed with an eye for detail right down to the drain hole in the base of the sheath. This is an excellent idea. Wet knives when returned to the sheath have a small amount of run-off which can pool in the bottom of the sheath. If there is no drain hole the damp environment at the bottom of the sheath becomes a breeding ground for bacteria making your knife unhygienic. Other notable features of the sheath which I shall quickly mention are the high grade leather, the speed and ease with which the knife can be withdrawn and the security strap which ensures you cannot lose the Woodsman - even if you do a hand stand!

The Woodsman is priced at £49.95 and is without doubt the most perfectly designed rabbiting knife I have ever used.

The Buck Caping knife is the brain child of a Montana Elk hunter. The 3.5in blade is magnificently sharp like a scalpel with an incredible pin point tip to the blade. On the back of the blade is the Buck gutting hook, reckoned by many to be one the best gutting hooks available. I really do like this little knife which sits so well in the hand and cuts through rabbit fur like it was tissue paper. The handle is made from plastic with a dimple effect giving positive grip retention. The sheath is ballistic nylon. Many people prefer the use of modern materials – especially in sheaths – in which case this Caping model may be the rabbiting knife for you. The Buck Caping Knife is priced at £38.95.

* (Editor: Phenolic is a resin often used with layers of cloth or paper to form a very tough, strong, corrosion and heat resistant sheet material)

The Buck Alpha Folding Knife is designed for larger game. I had this knife tested by a game keeper with nearly thirty years of experience. He showed me a cardboard box bursting at the seams with knives which he had collected over that time, none of which really impressed him. He has to field dress deer on a daily basis going through more than 100 deer in a session. His knife also has to cope with general tasks like sharpening wooden stakes and cutting rope. He tested the Alpha folding knife for a period of just over six months dealing with more than 80 deer with the knife in that time. When I went to him for a report on the knife’s progress I was expecting a list of its negative features because he is extremely hard to please… but this is what he said;
“It is the best knife I have ever used in over thirty years as a game keeper.”