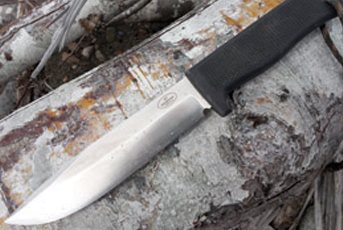 I have just returned from British Columbia and had a great time, in no small part due to the knife I took with me – the Fallkniven A1. Heading out into the middle of nowhere you need some serious steel and this is it.

The blade is 160mm long with a full tang and 6mm thick with a half convex grind and a continuous but subtle curve or belly. At the rear is a small hammering point. The point is clipped either side with a slight curving drop point for just under half its length, then ? at the rest of the way back to the chequered Kraton handle with lanyard hole. Overall length is 280mm and it weighs 305-grams.

The blade steel is a 59hrc VG10 cored laminate with I believe 420j steel on the outside for durability. There are a couple of options on the sheath, Zytel with a riveted nylon belt loop, retaining strap,  friction lock and drain hole, or traditional full grain black leather. The knife is also available with a black CeraCoat ? nish.

First port of call is size. It must be small enough to have on you all the time, yet large enough to perform the basic tasks required. Worn on the hip you barely notice it and it drained well while wading in the river. The retaining strap and friction lock held it securely in place. I rendered a dead standing, ten foot by six and a half inch diameter red cedar log into eight lengths and split them down from quarters to kindling, having already prepped a three inch diameter baton for the task. Though only a medium sized blade the geometry is the cleaver bit. The steep half grind and thick spine make a great splitting wedge, giving plenty of area for battening, and good heft and balance for chopping.

The VG10 core steel is easy to sharpen and prior to my logging exercise I could shave my arm with it. It wasn’t far off by the time I had ? nished either, thanks to the convex edge. By contrast after cleaning the slightly resin-marked blade, it was still sharp enough to slice two crude salmon ? llets ready to cook up on the bank, and after lunch tough enough for me to hammer into a fallen cottonwood tree with my baton, then stand on it to get a better view of the river. If I had one gripe it would be that the sheath should be able to hold Fallkniven’s DC4 duel sharpening stone and a large ? re steel, with these three elements together you could survive almost anywhere. As far as the knife goes I cannot fault it. Just ask yourself the question; is my life worth £175?