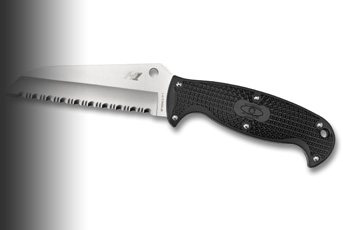 As with many of the knives in the Spyderco range, the Jumpmaster was developed in response to a specific need. This design was crafted in close co-operation with Lieutenant Colonel Bryan Hernandez of the U.S. Army’s 82nd Airborne Division. The requirement was a simple – an easily deployed fixed blade knife that would reliably cut a parachute static line in a single swipe. The complication was that the knife had to be small enough to be carried about the person and readily accessible.

Made in Japan the design features a full-length, hollow-ground, straight-line, fully serrated sheeps foot blade in H1 stainless steel and carries their trademark round hole. It is one of the new generation of corrosion resistant steels that not only holds a fine edge but improves blade hardness with each re-sharpening. Spyderco’s Tri-Angle Sharpmaker is designed for use with this profile. The scales are moulded black bi-directionally textured FRN (Fibreglass Reinforced Nylon) and include a generous lanyard hole. A moulded polymer sheath with a discreet snap lock holds the knife ready for deployment. The ambidextrous carry sheath is designed to be mounted on the lower leg of the user although the positioning of the mounting slots allows for the sheath to be attached to almost any webbing carry point. Devoid of a clip or other furniture the knife has sectional symmetry and can be placed in the sheath facing in either direction.

Prototypes were submitted for evaluation by the 82nd Airborne Division and soon approved for use. The Jumpmaster is now standard equipment for them. For the record, a jumpmaster is a person who supervises the jumping of paratroopers or other parachutists from an aeroplane.

I was able to give the Jumpmaster an equally tough challenge. Traditionally the stems of hop bines (yes, that is the right name) are cut with a reap hook. With hardy varieties of hop such as Challenger the toughness of the stem can take the edge off the hook in less than 500-strokes. The challenge was to cut hop bines with the Jumpmaster until it lost its edge. We sliced through no less than 4800 in a long day first and the blade was still keen enough to slice the thumb of a chef who was admiring it that evening.

We continued for another couple of days before any dullness was noticeable. The Jumpmaster made many friends in that short time. It is a truly extraordinary tool, combining industrial durability with surgical precision. Sadly UK law requires the owner to have ‘good reason’ to possess this superb tool, so it is fortunate that there are many applications that justify ownership of this specialist cutlery item.