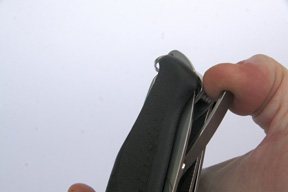 What one person requires from a knife or multi-tool over another is very much down to the type of sport they participate in, and of course personal taste. It can even be dictated by the fact that you may want a ‘tool’ that crosses over between different sports or hobbies. The Alinghi from Wenger, though definitely designed as a ‘specialised’ tool, manages to serve a variety of purposes, as we shall see.

For the uninitiated Wenger are one of the two companies responsible for bringing us that household legend in multi-featured pocket knifes – the Swiss Army Knife. The name ‘Alinghi’ won’t be generally as well known, as its a Swiss Yacht club, but it’s also the name of the sailing syndicate set up by Ernesto Bertarelli to challenge for the America’s Cup Yacht Race and the name he gave to several yachts he raced. Alinghi successfully challenged for and won the 2003 America’s Cup in Auckland New Zealand and successfully defended at the 2007 America’s Cup in Valencia, Spain. So why all this nautical information… well it explains why Alinghi and Wenger signed an official supplier and licence agreement for the 32nd America’s Cup. This brings together two of Switzerland’s most powerful symbols – the defender of the America’s Cup and the famous Swiss army knife.

As this knife was originally designed for boat users and for use by the crew of Alinghi, who were instrumental in its design, you’ll now certainly be asking yourself what has a knife designed for sailing got in common with a knife requirement for the hunter. Surprisingly, quite a lot.

First, the Wenger designers have reworked the geometry of the knife blade to achieve even greater torque resistance. In plain speak this refers to the blade being designed in a way to be much stronger when under twisting stress, therefore when needs must it can be used as a pry or lever - though knives shouldn’t really be used in this way. Of more importance, the knife has been subjected to stringent anti-corrosion tests performed by Empa, the Swiss national materials testing lab. All the metals and alloys used in the construction of the Alinghi knife have been triple treated to provide total corrosion resistance in even the harshest of saltwater environments. This is a godsend for hunters when out in all weathers, and will also help combat contamination when gutting and skinning.

The textured non-slip rubberised ergonomic styled handles hold a single-handed opening partially serrated blade, a shackle opener (with handy inch and centimetre ruler scale), marlin spike, 3-screwdrivers (medium cross head, and 2 sizes of flat head), a bottle cap lifter and the main tool - a needle nose universal pliers. A ‘pull out and over’ lever sits neatly at the base of the handle when not in use and it’s this that ingeniously brings the spring tensioned needle nose plier head out to lock in place. Once deployed these can be operated either by the thumb or with the chunky handle reversed so the fingers operate the tensioned arm for a heavier duty grip. Granted a few of these features may be obsolete for the hunter.

The best feature besides the pliers has to be the knife blade itself. It has a large ‘shark fin’ shaped hole on the spine for easy single-handed opening and once deployed it locks out solidly in position. To release the ‘lock liner’ mechanism to fold and close back you operate a push button at the side fashioned as the famous Swiss Army Knife ‘Swiss Cross’ symbol.

The Wenger Alinghi measures 5” closed and almost 9” at its longest (with the knife blade deployed). The tool is 1 ¼” wide at the handles making this one very substantial (and tough) tool. It comes in a hardwearing Nylon/Cordura sheath with belt loop and is priced at &pound89.95.