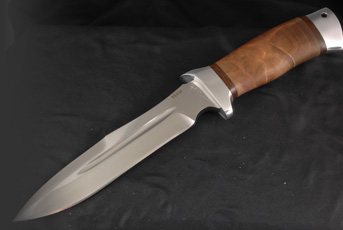 Although we have featured many knives from Zlatoust in these pages, this particular model seems to have passed us by – that is to say, we’ve just seen the Mk II version of the Zlatoust Korsa hunting knife, while completely missing the original model.

Actually there doesn’t seem to be much difference between the two models, apart from the fact that the first Korsa (which is still available) has a stacked leather washer grip, while the Korsa II has a handle made from Palisander wood (sometimes called Brazilian Rosewood).

As mentioned before, the Korsa II was made in Zlatoust (named after Saint Joan Zlatoust) a town in Russia traditionally associated with cutlery, comparable to Sheffield, Seki City, Thiers, Solingen, Maniago, etc.
Zlatoust is particularly famous for the elaborate engraving associated with some of their knife blades – which can be quite extensive in some cases. Although I see the value of this form of decoration, I can’t say that I particularly like it. Therefore it was nice to see that in the case of the Korsa and Korsa II, there was no such engraving to the blade, and that any cosmetic value was purely found in the shape and construction of the blade, the overall design, quality materials and remarkable craftsmanship.

This knife is a true craftsman’s piece, with an unusually shaped serpentine ‘spear-point’ blade made of 40x10CM2 steel – a tough alloy created for the Russian armaments industry. The fullered blade is 16.5 cm (6.5”) in length with a long shallow curve on the base of the spine and a deep choil on the edge side of the ricasso, giving the blade the appearance of a ‘waist’ just below the satin polished metal double guard.

The ergonomically shaped Palisander grip has an attractive colour and grain, accentuated by contrasting rings at the top and bottom. A metal pommel, pierced to take a lanyard adds a finishing touch.

Weighing approximately 260g, and with an overall length of 28cm (11”), the Korsa II is a fairly substantial knife for heavy duty cutting, but balances well and is easy to control for fine work (aided by the choil).

I also prefer the fact that it has a double guard, as Many Zlatoust knives follow the Scandinavian style with no guard at all.

Both the Korsa II and it’s predecessor come complete with a heavy duty leather sheath.
At £248.95 the Korsa II is not cheap, but of all the Zlatoust knives that I’ve seen, this is far and away the most stylish and practical. It’s also worth noting that the original Korsa is priced at £219.95 and apart from the handle material it’s virtually identical.