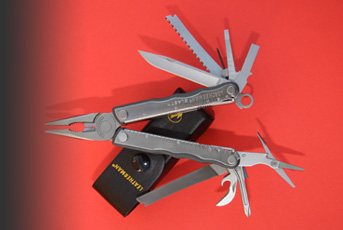 In recent times Leatherman seem to have concentrated on creating basic and minimalistic multi-tools. The onus being on weight saving and compactness, but in certain peoples opinion at the cost of tool functions; which is what the design is all about. When you consider the Skeletool and Freestyle, though the former has been a huge success for the company, in certain ways that approach holds water but it’s very much a case of horses for courses. In other words they’re building multi-tools to fill certain niches, not just punting out model after model with maybe one feature difference.

The Blast has been with us for some time and was the first multi to feature the Zytel handle inserts; I rate these highly as they really do give a comfortable grip when using the pliers. In fact it was the Blast that spawned others that followed that I’ve previously reviewed such as the Fuse and Kick.

Manufactured from 100% stainless steel the Blast has a closed length of 4”, 6 ¼” in pliers mode and weighs 6.9oz. Already, those that know their tools will realise that’s very light considering what it offers. Opening out the handles reveals the now familiar needlenose pliers, regular pliers, wire cutters, hard wire cutters and wire strippers. Also it’s the real deal when it comes to grip; as the handles are rated to withstand up to 175 lbs of pressure being exerted on them.

All other tools are accessed from the inside of the handles meaning this butterfly design has to be opened to select a tool, then closed again so it can be used in complete safety and security due to the full double handle grip it affords.

Functions include; 2 ¾” clip point knife, 2 ¾” wood saw, small bit driver, small and large screwdriver as well as a lanyard attachment ring. From the other handle emerge a 2 ½” wood/metal file, bottle/can opener, medium cross head screwdriver and a pair of sprung scissors. All lock out solidly and are returned by using the familiar rocker lever on the outer bottom edge of the handle.

Many will also realise this means the Blast offers the most useful and requested tools, and in comparison to other multi-tools of this kind they are longer. This is a major plus point, as due to the extra length it’s easier to cut, saw and file with the blades and you have an extended reach for using the other implements.

The Leatherman Blast show a heavier duty build, in comparison to other light and compact multis. In fact, I was so impressed by the Blast I really do hope this model doesn’t become overlooked for the more in-vogue multi-tools. In my opinion it offers almost all a multi-tool needs to, and quite frankly in more useful proportions considering their extra length. The ‘sprung’ scissors are particularly easy to use and combined with the gripping force and Zytel handles this is a model that shouldn’t be overlooked.

For: Well proportioned with a useable tool selection
Against: Maybe a bit too Spartan for some
Verdict: If you’re looking for a compact yet practical multi this just might be it