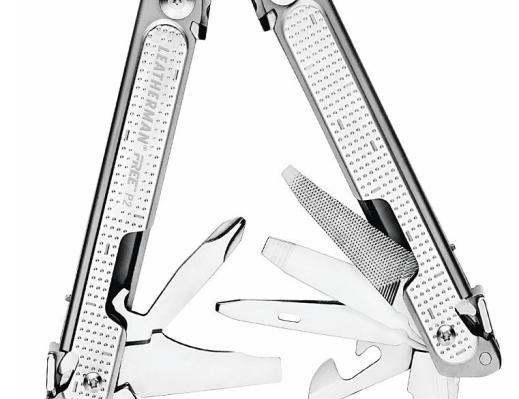 Leatherman is one of the world leaders in the design and manufacture of what are universally known as ‘multitools’. So, if anyone has the know-how to change the way we have come to accept and know them, it’s Leatherman.

Founded in Portland, Oregon USA in 1983, they officially launched the first multi-tool based around pliers instead of a knife, it was called the PST (Pocket Survival Tool). It was so successful and popular that it went on to be produced (obviously with modifications and upgrades along the way) until 2004. Since then you could say, the rest is history. They have continually brought us many new and innovative models since, and now it seems a new chapter has begun with the launch of the ‘FREE’ series.

The tools under this banner use a totally new locking/ release mechanism for the outboard tools. Also, when the handles are fully opened they click into location lugs giving extra security for the plier heads. In this mode you have needle nose pliers, regular pliers, premium replaceable hard-wire cutters, premium replaceable wire-cutters, a wire stripper and electrical crimper.

The P2 has an all stainless steel build and measures 6.5” when open and weighs 7.6oz. When closed it measures 4.25” and is held shut by magnets.

While the knife has an elongated thumbhole for one-handed opening, the others can be levered out by pressing down on individual lugs. These are located on their outer edge, just forward of their pivot point in the handles. They lock out very securely and can be unlocked by pushing a lever behind the tool’s pivot point.

To deploy the scissors I found it easier to use both hands, but they lock out using the same leverlock mechanism as the other tools. A noteworthy feature is that they are generously sized and cut through materials such as thread, string or cord very cleanly.

The handles feel good in the hold and the side-plates have a multi-indented finish that affords a better grip, plus they boast a detachable pocket clip. Incidentally, at present, the series comprises two plier based multi’s; the flagship P4, P2 plus, and the T2 or T4 which are knife based.