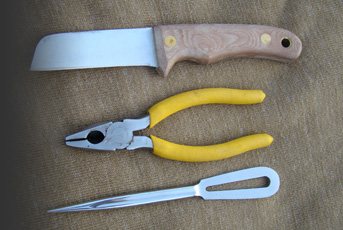 I’ve spoken to Rory a few times on the phone, but I’ve never met him ‘in the flesh’ as it were, and perhaps that’s not a bad thing, because I feel that if we ever got to talking about knives with a drink in front of us, we could be there for days.

Not Just Skinners and Hunters

Although for this publication we are mostly concerned with hunting and skinning knives, my own interest in blades is much broader, and so is Rory’s. Although he makes great hunting knives, and a particularly good (and useful) Bowie knife, he also specialises in other areas – for instance, he does very well with a great line in cheese knives… I kid you not. He also mentioned to me (ages ago) that he made a mariner’s rigging kit, and this interested me greatly, as my former job was as a steel erector – a landlocked rigger you might say, but still based on a knowledge of wires and ropes, and what could be done with them.

So when Rory mentioned his ‘All Hands Rigging Kit’, I was really enthusiastic about it, and asked him to send me one for review… that was way back in the day when milk and coal were delivered by horse-drawn wagons – or so it seems – and after a few years I’d almost forgotten about it. Then out of the blue, Rory phoned to say that a rigging kit was on it’s way – as though we’d been talking about it yesterday - and sure enough, one arrived within a couple of days. If you’ve ever been to the southernmost part of Ireland, you won’t find this unusual, as you’ll know that there’s a different concept about time down there; a phone call from a friend to say ‘I’ll pop over to see you sometime’, could have them knocking on your door five minutes later, while ‘It will be ready next week’ could refer to any week right up to the end of time itself.

In Rory’s defence, if you commission a knife from him, you’ll get it as ordered and on time, but he’s a victim of his own success in that while completing his orders, he hasn’t got the time to turn out a knife just for the press to ‘have a look at’ – and if he did, the chances are that somebody would buy it anyway. Nevertheless, the rigger’s kit duly arrived – and it was well worth the wait.

Built With The Job In Mind

The All Hands Rigging Kit consists of a fixed blade knife, a pair of pliers, a combined marlin spike/shackle key and sheath/frog to keep them all together. The most important part of this kit is the knife, which takes the form of a 2mm thick stainless steel blade with a flat ground 3.5” edge, a traditional sheepsfoot tip and a Tufnol handle with integral guard, lanyard ferrule and solid brass fastenings.

Hands on experience of the needs of the job are always the catalyst for the design of the tool. In this case the knife would be expected to cope well in wet or greasy conditions, in stormy or foul weather, and deal with everything that it comes into contact with – from rope fibre and salt water to fish guts and diesel from fuel lines – and still be able to cut cleanly.

When working at sea or in a severely adverse environment you try to keep one hand for the job and one for yourself, meaning that a fixed blade knife will always ace a folder that needs two hands to open. It’s easy to lose your grip on a knife, which is why you use a lanyard so you don’t lose it altogether, but even so you wouldn’t want a knife with a sharp point bouncing around on the end of a lanyard that you are still attached to – which is why most rigging knives have blunter sheepsfoot tips. The materials that the knife is made from should be resistant to anything that can be thrown at them – hence the stainless blade and Tufnol handle.

Completing the kit is a pair of dinitrol treated Draper combination pliers – always handy for 101 tasks – and a forged, heat treated, polished stainless steel marlin spike with whipping groove. The marlin spike is a very useful tool for unpicking tightened knots, opening up the lay of a rope for splicing, used as a handle to help break (open) tight shackle pins, as an awl or brad for making holes and many other applications. This one incorporates a shackle key eye, that can be used to break a tightened pin on smaller shackles.

The whole set comes in a soft, supple, waterproof leather sheath with braided nylon stitching, solid brass rivets and a ‘break away’ safety belt loop (this features a lithium greased popper closure that allows you to get the whole kit off your belt fast if you got in trouble). The knife sits at the back of the sheath, the pliers are locked in with a leather strap and popper fastening at the front, while the marlin spike sits in a tight attached frog to the side of the main sheath. All the tools are secure yet easily accessible, although it must be said that the sheath is not quite up to the same standard as the other components in the set.

Although designed for work on boats or dockside, the ‘All Hands Rigging Kit’ would be equally useful in other outdoor pursuits – with the possible addition of a folding saw it would make the ultimate hide building outfit… you could even use the marlin spike with paracord or the like to ‘sew’ branches and bundles of vegetation together.

The knife will give a good account of itself anywhere; the sheep-foot design means a long spine and a straight edge for powerful cutting and the ergonomic handle keeps it comfortable over prolonged use – it will sharpen easily too.

Rory was at great pains to explain that this was his ‘working’ knife, and that the set was made down to a price, while ensuring the highest standards of material and build. At just £80 for the set and £10.75 p&p, it has to be a bargain.