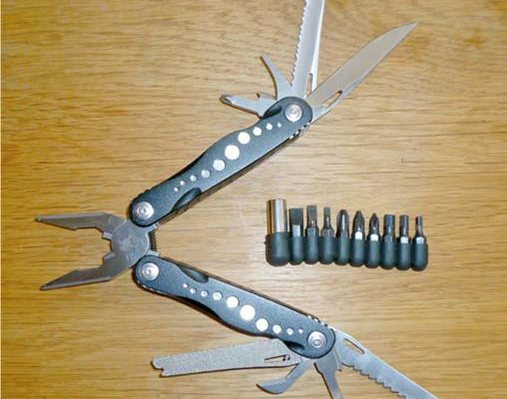 Trento have a wide range of knives, (both fixed and folding) and multitools of various sizes. On test here is a really useful multitool that has a trick up its sleeve, or should I say, ‘in its pouch’!

The Trento 131581 multitool, to give it its model number, is formed from a pair of folding, springloaded, stainless steel pliers with black anodised grip scales that have a series of lightening holes and scallops, which provide extra grip in use, as well as add a certain ‘flair’ to the overall design. The two-tone look is attractive but good looks count for nothing if the tool isn’t up to the job! No problems here though, as the plier head can grip all manner of objects in its part straight/part curved jaws and wire can easily be cut near the hinge point.

The internal spring helps a great deal when you’re using this tool and I wish more multitools had them fitted. There are rubber strips fitted to the backs of the handles and these provide enhanced grip, even when wet.

The tools are housed in either side of the plier handles and are as follows- One side has a razor-sharp, sub 3-inch, nonlocking knife blade, a small flat screwdriver, a Phillips screwdriver with beer bottle opener (always handy!) and finally a serrated knife blade that is also non-locking and sub 3-inches long. These nonlocking blades ensure that this multitool can be carried where those with locking blades cannot – a very useful feature considering our often bizarre knife laws.

The other handle has an extremely useful, double sided metal file, a tin opener, an extremely sharp wood saw blade and finally a square drive for the added extra that is found in the Nylon sheath that is included. A rubber bit holder is housed in a small pocket on the front of the pouch and there are three flat blade screwdriver tips, three Phillips bits and three Allen keys- H3, H4 and H5 in size.

As usual, I gave this multitool a good workout and found it extremely useful to have around when shooting and it’s also handy when out cycling etc. The tool is well-made and comfortable to use but just be aware of those non-locking knife blades. A really nice bonus is the fact that the Trento Heavy Duty Multitool is only around £55, which just has to be a bargain!