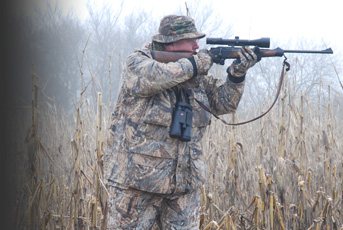 Though having looked at the Browning’s, Grand Passage Waterfowl clothing before I have not used it for some time as I have one of their XPO (Extreme Performance Outwear) suits in Mossy Oak Break Up camo. That was until some ba***rd broke into my Land Rover and stole it…

In terms of ability there is little in it as both garments are from the XPO rang with the Grand Passage being aimed at water fowlers, hence the Mossy Oak Duck Blind pattern. Quality and ability is superb with lots of protection from the elements combined with good breathability and generous and practical pocket layouts.

Suffice to say with the cold weather approaching last year and the loss of my XPO gear I needed some decent clothing for hunting, so dug out the Grand Passage suit. This consisted off their insulated parka and bibs (salopets), gloves and baseball cap. This set has served me all through the winter period from mid October to the present and I have to say that it was not found wanting. Plus the apparently dedicated Duck Blind pattern proved highly effective.

All the clothing is made from a material called Pre-Vent® which is a waterproof, windproof and breathable fabric. With past experience from my XPO suit I did find that in terms of user comfort this material really works with the lack of heat build up and perspiration problems hard to beat.

Typically I tended to use the parka more than the bibs, unless it was really cold or in a static position. I recall laying in a hedgeline wearing the full rig waiting for a slow moving roe doe to come into range for nearly 20-mins and feeling warm and snug all the time.

The build goes for select weight insulation system that maximizes warmth and freedom of movement. A mesh moisture barrier strip is positioned between outer shell and brushed tricot lining. Sleeves are set-in with one-piece, no-seam construction and articulated elbows for ease of movement. With a waist cord and adjustable neoprene cuffs, hood and storm flap this is one effective design.

The hood is most practical as it zips on and is lined to keep the heat in. With an integral peak, high neck/chin guard and a pull cord to cinch it round the face it completes the care package certainly when waiting for quarry in the cold.

Pockets are generous and their layout practical with a total of ten. Lower front we have a large one with magnetic flap and a medium one on top with a pull-out, 5-shell cartridge carrier. Behind these are hand-warmer slots. On either side of the chest are massive, bellows-type slots with hand warmer pass-throughs behind. With a press stud vertical closure they are easily big enough for a rangefinder or even set of compact/medium binos.

For me they very much address the normal lack of upper stowage found on most US hunting jackets. Plus they will accept Browning’s Gear ‘Triever™ System, which consists of roller cords you can attach items like keys or optics to, so as to keep them secure. Inside on the left breast is a zip pocket for wallet, etc. At the rear is a left/right entry, zippered poacher’s pouch.

The bibs are simpler though show the same build and materials. The beauty of this dungaree-style design is that they come up to the chest and offer full protection to your middle area even when bending/stretching with their elasticated side gussets. The outer legs show a full-length zip with flap/stud closure for ease of putting on and removal.

The chest is closed by a central zip and studded storm flap with elasticated/adjustable braces to keep them up. Pockets consist of two flap/button types at the front and a zip closed at the rear right. The gloves show a long cuff with neoprene ends with a lined palm for secure grip, along with an articulated trigger finger.

Finished off with decent boots and thermal underwear or not, the Grand Passage though primarily aimed at the wildfowler is a superb cold weather/camo set-up for the deer hunter too.

Of most interest was the Duck Blind pattern. I have often thought that a predominately brown bias is far better than anything else. As can be seen it consists of greys, ochre’s, yellows and browns with slight touches of dull orange and green all in photo-realistic, marshland-type shapes. In the winter field it just blends in with everything, I was gutting a deer I had just shot wearing the full suit and my keeper drove in and until he was about 25-yards from me he could see a shape but nothing specific. I’d love to get some summer-weight gear in this pattern.

Overall no complaints , though for the rifleman I found the gloves a bit on the bulky side. That aside this is some of the best cold weather, camo clothing I have ever used. Must make sure I take it out of the Landy at night…

For: Well built and efficient with a versatile camo pattern
Against: Not a lot
Verdict: If you want serious and practical cold weather gear this is it