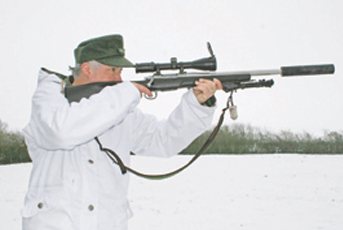 The jackets worn by Burton, Eastward and their team of spies were reputed to be ultra rare German 1945 Splinter type D pattern, but new info would suggest they were made especially for the film. Either way a chap called Keith Howes from www. extremeoutdoorclothing. com was inspired enough from the film and customers requesting the iconic WED camo jacket that he decided to manufacture the Parka himself.

This was not just to be a cheap re-enactment garment but to be produced to the highest quality with modern materials yet still have an authentic rendition of that unusual camouflage pattern that instantly labels the jacket as a WED item.

Built to Last
Anyone familiar with the film will know the Parka is a reversible item, in that I mean one side is camouflaged and the other is pure white. Thus woodland and snow camouflage is obtainable in one jacket by simply turning the jacket inside out. Due to this design the buttons and fixtures and pockets have to be replicated and twice the amount of fabric used, thus this is not a cheap or light item. Having said that, the price of £179 plus p&p is actually very good when you see and feel the quality of this item, plus its uniqueness, and although weighty it`s a good hard wearing jacket.

The fabric is made from Combat 2000 material which is a polyester/cotton mix as used by the MOD to make their hard wearing issue combat jackets in the early 2000`s. So it is designed to take very heavy use. Nothing is completely squaddie proof but you will have to go a long way to wear this jacket out. The printing is similarly as good and printed to MOD spec, so it will never fade and also has a water resistant finish that’s good for at least 30 washes. This fabric was used for its strength and also it gives the same drape and look as the ones used in the film.

Additionally the jacket with its 2000 material is very windproof and by virtue of its dual layer construction makes it unsurprisingly warm although a tad heavy as discussed. The buttons are from the 1960`s and are ones used in Bundes uniforms and give that authentic look.

Made To Measure
These Parkas are not off the peg items, instead they are individually made to your own measurements - yes it’s a tailored camouflage jacket.

You are sent a form to fill in your measurements; modesty prevents me from sharing mine, although I mistook cm for inches and Keith rang to check, as my template looked like Mini-Me! But seriously this means you can have a jacket that fits your torso and still have arms long enough to cover the wrist area.

The jacket has an integral hood with a drawstring of woven cotton that allows the hood to sit loose on the back of your shoulders or be tightened into the face to provide protection and not obscure your vision.

The fixture at the front is almost double breasted due to the reversible nature of the garment. The left side flap is secured using the buttons to the right to form a closure and then an additional flap on the right is buttoned over the top to form an additional barrier utilising the same buttons. It makes a very secure and warm closure, yet still allows full movement to your arms. At the waist as well as the hem are drawstrings which can tighten the waist area and tuck the parka in over your backside.

There are two large pockets to the front and bottom of the jacket secured by a single button and cut on a slight slant, and of course this is duplicated on the inner surface too.

Arms are reinforced with a separate piece of 2000 material on the elbows and the cuffs are buttoned and have a drawstring to stop rain ingress and loss of heat.

Splinter Pattern
Most important is the camouflage pattern. Whether it is a WW2 pattern or not it is a faithful reproduction of the original from the film. It can be described as a cross between a Wehrmacht Splinter pattern Type A for the colour and Tan and Water pattern for the blocks of camouflage.

It has a very good “open” pattern that works very well as a disruptive camouflage image , which let’s face it is pretty much the point really! The predominant sand/beige background allows the eye to look through the pattern as it is intersected with overlaid geometric patterns of green and reddy-brown camouflage segments. These are similar colours to the types used on many Tiger tanks of the same era.

The hard edged patterns are softened with blurred edges which adds to the overall camouflage effectiveness and if that was not enough the whole pattern is finalised with “rain drops” or splinters that run vertically through the pattern causing further disruption. Close up or at a distance it is amazing just how effective this pattern is at blending into the surroundings.

Conclusions
Whether you are a reenactor, collector, film buff or - as me - a sportsman, you will be delighted with this excellent quality parka. Well made and in fact highly practical as a hunting garment, I have used it to good effect in both woodland and snow. Regular readers will probably know I am not a great camo fan, but my money came out on this one and it’s actually nice to have a garment that is practical and raises smile when I watch the film Where Eagle Dare with the kids (Editor’s Note: Please don’t tell us that you wear it while watching the film…).

I am planning a trip to Werfen in Germany where the film was shot and yes I will be taking the jacket… my wife says I am having a mid life crisis! If you want a truly bespoke made camo jacket with a great pedigree and iconic film connections, then give Keith Howes a call on 01543 258872, or mobile 07941 644328 or visit his web site at www. extremeoutdoorclothing. com. Also if you know the whereabouts of an original jacket please contact Keith.