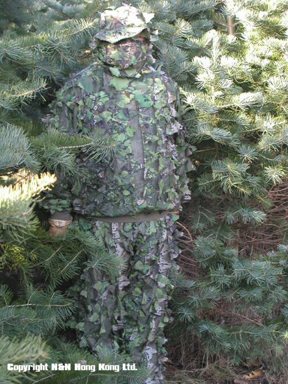 Just after the printing of my Total Camo guide - that went out with Shooting Sports and Gun Mart last year - I was contacted by Morten Larsen General Manager of X3M1. They offer a wide range of outdoor products - clothing, knives, scopes, high seats etc and he wanted to know why I had not included their camos. Simple, I had seen and visited their stand at the IWA for two years running and asked for product, but it never got any further than that. I told Morten I would be only too happy to see what they had to offer and in two weeks a package arrived. Inside where three, 3D, cut leaf Camo Sets in some interesting and unusual patterns, plus the SGS 01 Ultimate Camouflage Set, which is a form of Ghillie suit.

Though mainly a user of what I would term as solid clothing, I have always found what we call a net suit very useful too and this is what the 3D is. The idea is not a new one and a lot of companies offer variations on this theme. Basically it consists of a light/breathable mesh in a simple pull over jacket and trousers design with the camo pattern printed on it. Often with gloves and a head net included for 100% effect.

Cheaper and lighter than solid clothing, it offers a quick ON/OFF camo garment that can be easily carried as it packs down small, or in the hot weather worn instead of heavier clothing to keep you cool yet totally concealed. The X3M1 offers this mesh build but has enhanced its effectiveness by adding cut leaf camo cloth to give a three-dimensional effect. The idea being that the outer material acts like real leaves/foliage by breaking up the outline and even moving naturally. The general effect is amazing in woodland, and even out in the open you can stand, kneel or go prone and as long as you keep still the camo will do the rest. Tests from a few years back with the similar concept, Russian Leshy sniper suit showed that it’s the un-camouflaged gun that stands out and not the shooter.

The 3D is what X3M1 calls a 5-piece suit - top, bottoms, bush hat, balaclava and gloves, these last items are not cut leaf but solid cloth, which is better for operating rifles etc. The top is cut like a sweat shirt with elasticated cuffs and hem and a high, V-neck. There are no pockets, nor slots so you cannot access the clothing underneath.

The trousers show an elasticated waist with a draw cord and pocket access slots at the top sides. The ankles can be closed off with press studs and open up enough to be able to get them on over boots. The bush hat is floppy and does the job as does the long balaclava, with a peak and elasticated cord that allows you to cinch it down tight.

The gloves are soft with an elastic cuff, though they are not that big, so it would not be easy to wear thermals underneath in the cold weather, as they offer no protection. Spoiling the effect a little is the large, light grey, rectangular label on the back of the left hand with X3M1 Outdoor Collection emblazoned on it. Call me picky but this regular shape really draws the human eye; best to get the knife out and bin it…

In use the 3D suit is relatively quite and makes no more noise that the leaves it copies. Generously cut it will easily go on over standard hunting clothing and offers unrestricted movement. Sizes run as high as 3XL, so just bear in mind it needs to be bigger than your normal gear and order accordingly. The camo is best described as generally photo-realistic with small leaf and basic tree bark shapes. By comparison it is far more non-specific than say Realtree AP for example. Colouration is also interesting as you get four choices.

Spring Green shows olive and lighter greens with chocolate and ochre browns on the bark areas, all of which is interspersed with thin, non-specific black lines. To my eyes it certainly strikes a good balance for spring/summer woodland work. Pretty much identical apart from the colour is Wetland Brown, though it uses darker greys, greens and browns but on a lighter mesh base as opposed to the darker one of the Spring. Both proved highly effective for our terrain with my favourite being Wetland Brown.

Oddest of all is the Original Wetlands with rush and reed types shapes with light and bright greens and near red brown colouration. When compared to stuff like Advantage Wetlands and Mossy Oak Duck Blind that goes for the yellow/ochre/light brown/grey themes I’m not so sure of the pattern. However, and to be honest, people generally pick a camo for how it looks to them. So if it’s doing the job in breaking us up to wildfowl’s eye’s (which it seems to do) then does it matter? But I would bet that this will not be a popular choice in the UK…

Finally we have Snow and I think this is the first cut-leaf camo suit I have seen in this colouration and material. The 3D effect of the clothing really suits the white stuff as it will give a natural shadow effect and the required contrasts that can make it so effective. However, X3M1 have hedged their bets and put a slim, curvy black web over the top.

Finally we have the SGS 01 Ultimate Camo Set (Ghillie suit), which goes for a breathable mesh top and bottom only this time it has a four colour light/olive green, chocolate brown and black digital pattern on the material. On top of this are sewn-on horse tails of hessian in two greens, brown, ochre and black. The jacket shows a full, integral hood with draw string, it fastens at the front using press studs and has side slots to access clothing pockets underneath.

The trousers are pull-overs with side pocket slots, elasticated waist and cuffs with long, press studded gussets to allow them to go ON/OFF over boots. When compared to the sniper-type Ghillie suits we are used to in the UK, the SGS is sparser in terms of 3D effect, which in my opinion makes it a bit more general use. But it certainly works with the realistic hanks of coloured hessian material really breaking up the outline. However, what it does miss in my opinion is loops to attach local foliage too, should you want the 100% effect. What also would have been good is some form of veil to cover the lower face; however one of their balaclavas in Wetland Brown would do the trick here.

Overall I was most impressed by these two suits and X3M1’s camo patterns, though I’m not keen on the Original Wetlands, but then again I’m not a duck! With all this total camo clothing what you are going to need for the full effect are rifle and moderator covers too, as believe me they will stick out like a sore thumb with such effective garments… I mentioned this to Morten and he told me he will be working on it for this year.