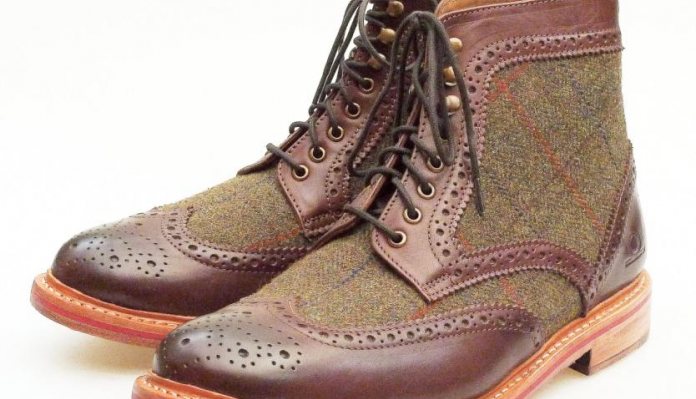 We country types are often accused of wearing our shooting attire a little too often and occasionally in inappropriate surroundings. But the one thing most shooters have in common is that they like to get their wear out of their kit and, as a rule, it tends to be some of the best, most expensive and smartest they own. Well here’s some gear that looks equally at home climbing out of a 4x4, relaxing at the bar taking some light refreshment after a day’s driven pheasant as they do attending a business meeting or strolling along the city streets.

Handcrafted by Chatham, the Stornoway Tweed Brogue Ankle Boots elegantly combine two of shooting’s most desirable materials namely high quality leather and genuine Scottish Lovat Tweed. Brought together by Chatham’s skilled workforce, the end result is a pair of sporting yet sartorial brogues that really do look the part wherever they are. Available with brown or tan leather, the contrasting green tweed complete with black and red detailing means they’ll look good with a variety of outfits either formal or casual whilst still hinting at your chosen pursuit.

Complete with brass eyelets and hooks that allow the wearer to determine the lacing’s height and tension, the boots follow the traditional brogue design. Atop tough leather laminated Goodyear welted soles that feature a contrasting and striking red leather insert, heavy stitching attaches the sole to the uppers. The uppers feature an eye-catching combination of premium grade, punched pattern leather and the finest tweed whilst the deep tongue and insole are lined in super soft tan leather, the end result be the perfect twist on merging tradition and modernity that will definitely appeal to the fieldsport fraternity.

The only difference between the Stornoway Tweed and your more conventional footwear is that besides the beeswax with which you polish the leather you’ll also need some fabric spray to protect the tweed and maintain the fabric’s resilience to dirt and water. Apart from that, a few weeks of wearing and the Stornoway will become as comfortable as your favourite pair of slippers, light and comfortable to wear with little or no breaking in needed. And don’t be put off by the modernistic soles, the tread provide plenty of grip once the shine has worn off. So whether you’re returning from the shoot, heading out to your favourite restaurant or out for a quiet stroll, it’ll be Chatham’s Stornoway Tweed you’ll reach for.

For over 25 years Chatham have been designing and producing some of the best outdoors footwear and it’s all guaranteed British. Establishing their reputation within the salt and spray ridden world of sailing, the company’s expansion into country footwear has resulted in some seriously desirable styles that are genuinely finding favour, their tied rope logo ensuring quality. And if the ankle boots don’t appeal then try the Lewis, the exact same as the Stornoway but this time a more conventional wing-tip brogue or as a full-leather version.

Really though, it does have to be tweed versions, not only do they look good but you’ll be surprised how many people ask you where you got them from. These are the first pair of Chatham boots I’ve ever worn but I guarantee you, they won’t be the last… no pun intended! Available in sizes 6-15 so you’ve no excuse not to purchase a pair, the Stornoway Tweeds will cost you a very reasonable £199, slightly less if you opt for the Lewis shoes. Whichever you go for, sartorial elegance rarely comes this affordable so to find out how to get your hands or your feet on or in a pair, visit www.chatham. co.uk or give them a call on 0845 2700217.