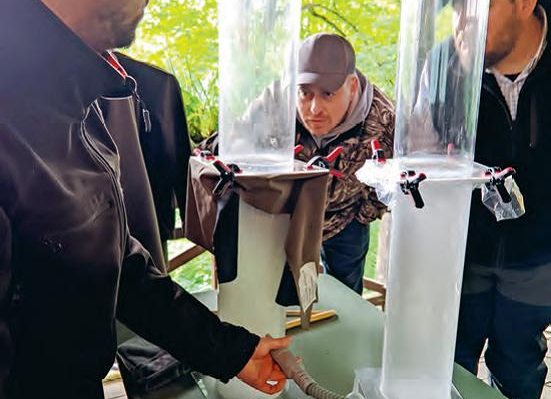 The she-wolf had seen me. She paused, then pivoted and began loping gracefully towards me. Then she stopped. Then advanced again. I glimpsed something out of the corner of my eye. Turning to look, I saw the rest of the pack flitting through the shadows under the trees. Silently working their way onto my left flank. I looked for the she-wolf again, and suddenly she was close. Danger close. Eyeballing me from just a few feet away. Huge in my field of view. Perhaps making that rabbit squeak hadn’t been such a good idea after all.

Fortunately, thanks to the 12-power image-stabilised Kite APC binoculars I was using, she was actually yards, not feet, away. And thanks to the good people at the Grottes de Han wildlife park in southern Belgium, there were two fences between the pack and me. One was electrified, and the other one was 3m high. I was safe, but still exhilarated, and the wolves would have to wait a little longer for their next meal.

I was there by kind invitation of Browning, who had laid on a press event to mark the launch of their new range of Winchester-branded clothing, plus a host of new garments and accessories from Browning themselves, and of course the latest optics from their Kite brand, hence the binoculars.

Prior to whistling in the wolf pack, I’d been testing the APCs out on a suspended walkway that snaked between the trees on a hillside cloaked in mature beech forest that terminated abruptly in a rocky precipice, giving views across a sinuous valley, its floor an even green pasture, closely grazed by free-ranging herds of diverse species (bison, aurochs, wild horses, mouflon, chamois, red and fallow deer), whose presence both evoked the ecosystem hunted by our Neolithic ancestors and energised the senses of their modern successors, or at least the pack of shooting journalists whose good fortune it would be to camp among them over the next two days.

But we were there to try out all the new kit, and to write about it, so I’ll stick to that from now on, and avoid rhapsodising about the jaw-dropping, cathedral-like, stalactiteladen, magically-illuminated caverns in which the keynote presentation and the farewell dinner were held, or the icy underground river that raced through them before spilling out into the sunlit greenery of an idyllic summer meadow. No. I’ll stick to the kit! (But honestly, if you’re ever in the Rochefort area, then don’t miss the Grottes de Han.)

The APC binos were great. There’s a switch to flick to activate the electronic stabilisation, and whether you’re on a bouncing walkway, or tracking animals through the trees or birds across the sky, the added stability is hugely impressive in itself and makes a major difference when it comes to identifying details of sex, age and condition. They’re not tripod-steady, of course, but the difference is more than compensated for by the improved eye position and free range of movement. Kite has some nice new riflescopes, too, whose balance of aesthetics, features, performance and price makes them worth a look when you’re buying your next hunting scope.

Winchester Ammunition is a branch all of its own, but Winchester firearms are part of Browning’s product portfolio. The key difference is that Browning’s products – despite the US origin of their namesake - are predominantly European in character, whilst Winchester’s have long been synonymous with life on America’s frontier, and in its woods and wilderness. Winchester’s new clothing range reflects that difference. The concept is of a moreaffordable line of garments that can serve double-duty as field and leisure wear.

Thus, the new Winchester clothing is simultaneously ruggedly-practical, stylishlycasual and attractively priced. Items include Columbus T-shirts, Falcon sweatshirts and Norwood hoodies, but also softshell (Twinpeak) and midweight (Huntsville) jackets built for hunting. Plus, Kiowa trousers with blouseable, shock-corded hems to keep everything neat at the ankles.

The bright red accent colour for the brand appears throughout in neat badges and studs, and discreet piping along patches, pockets and zips. The materials are good quality, being warm, stretchy, lightweight and wind-proof as required. They also show neat, tight, sewn or bonded seams and impeccablyembroidered motifs. Base colours include the usual forest greens and coyote browns, but also a digital arid camo pattern and some blacks, blues, greys and whites for everyday use. The tagline for the brand is the strong but universal, ‘Stay True’. Wear this gear to the supermarket or the pub and people may clock the classic American branding, but without asking you how the militia is doing!

Browning’s clothing represents a higher tier. It’s more technical, more fully featured and typically edgier or smarter in its styling. We tried out the Cold Kill jacket (stylish and warm, yet sleek and ultra-lightweight), the Early Season base layer (smart, lightweight and flexible with a zip-neck) and trousers (light, flexible and rip-resistant, with low-profile pockets and structured knees), both described as ‘brown’, but actually sage green. Plus the Javelin trousers (flexible, with a great fit, capacious cargo pockets and zippered lower legs with adjustable fasteners to seal against ticks). The Javelins are 2-tone, with a black seat, knees and cargo pockets, and the remainder in green, brown, or a surprisingly fetching ‘terracotta’ (brick-red).

A further revelation is the extent of the research undertaken by Browning to tailor the fit and colours of their ranges to the differing physiques and preferences encountered across Europe. A case in point is the new Norfolk range, which comprises a long waistcoat, with good pockets and suede patches on both shoulders, plus a hooded jacket whose outward resemblance to a traditional waxed cotton coat belies the cutting-edge materials used. There is also a choice of green, brown or blue stretch slacks, with suede pocket edging. All of which perfectly accords with the spirit of a British driven day.

One of the pleasures of the trip was talking to the outdoor product manager, Vincent Bigache, a specialist in textiles, clothing design and manufacture, whose expertise spans four continents. Vincent also gave us great practical demonstrations of what waterproofing, breathability, abrasion-resistance and quality construction really mean. In short, he could explain the why and wherefore of every feature of a Browning garment, revealing the meticulous thought and care involved at every stage in its creation. A good part of which is dedicated to delivering affordability without any meaningful reduction of performance.

We got to see all the new Browning accessories, too. These included (in my best Generation-Game voice): a series of Scandinavian-made Iridium sound moderators for rimfires and centrefires, a waterproof backpack duffel bag that comes in 40, 60 and 80-litre sizes, a selection of hunting knives with fixed and folding blades, BDM electronic ear-defenders with low-profile cups, gel cushions and audio jack, and Browning’s Claymaster shooting glasses, which come with 5 interchangeable lenses, plus a lanyard, pouch and case. I may have missed something here because the accessories presentation was given in a cabin overlooking an enclosure where two enormous European brown bears were alternating between frolicking in a pond and sunbathing on the grass, which isn’t something you see every day.

Neither was our subsequent excursion. This involved driving out of the park and up a random farm track, before piling out of our minivan en-masse, to face the surprise challenge of breaking open a perfectlygood Browning Defender 10-gun safe with a crowbar and sledgehammer inside of 20 minutes. The gauntlet was taken up with great gusto, especially by our Nordic and Spanish colleagues, who whaled away furiously - undeterred by a sudden summer downpour that had the rest of us scurrying back into the van - but succeeded only in snapping the crowbar. God only knows what reports any witnesses on the main road were phoning in, but the demonstration had been as convincing as it was unconventional.

Needless to say, I’ll be reviewing some of these items in detail in subsequent issues. For now, however, I’d like you to know that the trip wasn’t entirely a cushy number. Glamping in treetop tents was fine in principle, but ablutions amounting to no more than a pair of chemical toilets, a plastic bowl and a cold-water tap, plus sleeping arrangements involving sharing a mattress and a duvet with a full-figured German journalist possessed of a snore that would put a prize keiler to flight, and all without any prior warning that no 5-star hotels were going to be involved in the proceedings, were only just compensated for by the gorgeous green vistas thronging with wild game and the primal sound of wolf-packs serenading each other at nightfall. That, and the copious amounts of Belgian craft beer, of course. Thanks, Browning!