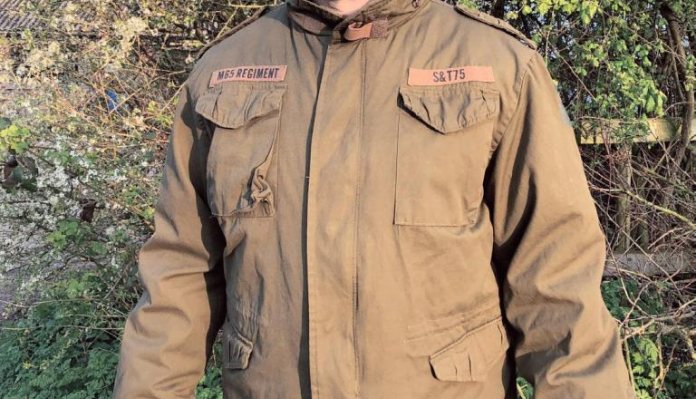 If you’ve seen the films ‘Rambo: First Blood’ and ‘Taxi Driver’, you’ll have seen the iconic, olive drab ‘M-1965 Field Coat’ worn by Stallone and De Niro. It was widely used by United States Forces during the Vietnam War, hence being worn by the above characters, who played veterans of that war. This hard-wearing and stylish jacket was originally introduced into US service in 1965 (hence the name!) and was a modernised version of the popular World War II era M-1943 field jacket; it was finally phased out in 2009. Before it was consigned to the history books, however, it was updated slightly and made in ‘Woodland’ and ‘Desert’ camo.

I have been wearing a replica of this jacket over the winter, called the M-65 Giant, made by Brandit and it’s a fairly faithful copy. The build is hip-length and has two large hip pockets and two mediumsized breast pockets on the front of the garment; there’s plenty of room for all sorts of gear, whether you’re wearing it whilst shooting or down the pub. It is made from a tough, woven cotton fabric and the rear of the stand-up collar has a zipped pouch, which houses a protective hood that can be used as and when required; it is relatively thin but keeps the wind off and can be adjusted via a draw-string. Both the waist and bottom hem have draw-strings to adjust the fit. The collar and sleeves are adjustable using Velcro tabs but the one that closes the collar could do with a longer section of hook and loop, as the one fitted is too small, so you can’t actually close it all that tight – that’s a minor gripe though! The shoulders have buttoned epaulettes.

The jacket is done up using a heavy-duty brass zip and six tough press-studs. The jacket is lined with thinner cotton material and is warm in its own right but it comes with a brown, quilted polyester inner that is attached by zips and the sleeves have pressstud fasteners on the end of them to keep them in place. The inner, green material is quite ‘fluffy’, so is very warm and has its own draw-cord on the bottom. The inner can be worn on its own and has two zipped pockets.

Well, I didn’t end up acting like John Rambo or Travis Bickle, just because I was wearing this jacket, which is just as well really but it’s kept me warm on trips to the farm and when out in the country with my family.