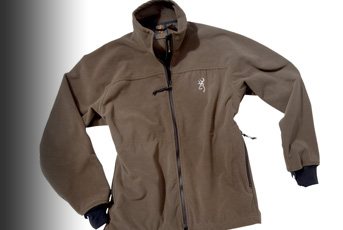 Like most modern and forward thinking firearms manufacturers Browning realised long ago that though people buy the guns they might also like branded items too. Probably the most lucrative is hunting and shooting clothing, and Browning have a lot of high quality garments to suit. About 5-years ago they introduced their XPO (extended performance outwear) range. I was sent a parka, removable, quilted inner jacket, over trousers and gloves in Mossy Oak New Break Up camo.

The XPO suit proved to be exceptional; made from a material called Pre-Vent, which is wind/waterproof and breathable, it was exactly that. Possibly one of the best garments I have ever owned in this area. Since then I have tested the XPO Grande Passage parka, gloves and bibs (salopets) in Mossy Oak Duck Blind camo. Aimed more at the wildfowler this shows a similar build but is lined and a true cold weather set-up.

A recent trip to Spain with Browning to test the new Winchester, Power Max bonded ammo, which I will be looking at in detail next month got all us journo’s some new hunting gear in the form of the latest XPO Lite X-Change parka, Genesis polar fleece and Illusion gloves. As an early XPO user I noted a slightly different approach to features but no loss of ability in terms of the build.

First up the big game parka.  As before PreVent material is used to give the required wind/waterproof and breathable properties. Plus the shell is silent XPO fabric for added stealth. The build is lighter, which is more practical and shows a semi-mesh liner that helps to wick away moisture. On its own this make the coat far more multi-seasonal than before, however, if you need more protection you can zip in the 80%, wind resistant polar fleece jacket (olive green) or the reversible (stone/blaze), down-filled vest. Both of these can also be worn as stand-alone garments too. An adjustable/ detachable hood is also included, which zips to the back of the neck.

In terms of build Browning has changed the design a little. Both my original XPO and Grande Passage parkas featured flip-out ammo holders, whereas the X-Change series does not. However, they do use the Gear Triever system on the exterior, Napoleon pockets. This by means of a D-ring and snap hook system allows the safe carriage and quick access for small items like calls, rangefinders or even compact binos.

The build is good with a high, stand-up collar, two-way main zip with double Neoprene/XPO storm flap and press studs. Non-slip panels are sewn to the shoulders for secure rifle carriage. Stowage is as before generous; with two, large box-type pockets with magnetic flaps at the front with pass-throughs behind. On the right and left breasts are two Napoleon-styles with single stud closure, which is where the Gear Triever rings sit. Behind these on the outside are hand-warmer slots, which are equally at home for storing kit. There’s a zip-closed, radio pocket on the left breast and inside left another. At the rear is a double entry (zip-closed) poacher’s pouch.
Cuffs are neoprene with Velcro adjusters and a draw cord at the waist. There’s also zips dedicated to securing the Polar fleece along with straps/press studs in the sleeve to secure the arms too. In Spain the temperature was 10°C and the parka proved warm enough without adding thermal protection. Two weeks later on a trip to Germany for boar hunting with Zeiss the temperature was down to minus 3-5°C; here with the Polar fleece zipped in the ability to add protection really proved its worth.

The cut is generous as is the arm length with sizes from S – 3XL available there’s plenty of choice. The Lite X-Change parka is available in olive green, Mossy Oak Infinity and Blaze (day-glow orange/black) camo patterns. This last is especially useful for driven hunts where this colour is mandatory and opposed to having to wear a vest over your coat, you can now have a top quality and practical technical garment in the right colour.

A final item are the Illusion gloves. With a Prevent membrane, camo trim and leather palms they are of a lighter build than the older XPO designs, which though very warm could be a little cumbersome. Certainly in the area of triggers and safety catches. Browning here have sacrificed a bit of thermal protection for more movement and tactility and added ‘Sensi-Flex’ technology on the forefinger for a better trigger finger feel.

They are of a gauntlet-style with Velcro strap to synch down the wrist. With the minus 5°C of the freezing German mornings they did not keep my hands as warm as the older XPO-style but offered a lot more address when shooting.

I think that Browning’s new XPO Lite X-Change clothing offers practical alternative to the earlier models and apart from the really cold weather will prove a more versatile product on a year-round basis. Though saying that; when it’s really cold I would not swap my Grande Passage suit for anything!

FOR: Practical and versatile adaptation of the original XPO big game clothing
AGAINST: Would have liked to see the Gear Triever included
VERDICT: Good kit, well made and suited to the serious hunter