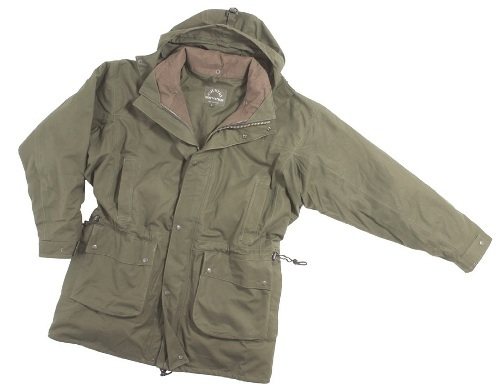 Country Innovation originally developed the Rover jacket almost 20 years ago, but after a well considered improvement plan with customer requirements in mind, this classic yet contemporary jacket continues to gain popularity.

Admired by many country enthusiasts for its robustness, the weatherproof Rover Jacket actually gets better with age, remaining soft and functional without the need for any re-proofing, unlike some jackets using other fabrics.

I’ve been wearing this jacket through fair weather and foul for almost a year, and I have to say that this is one of the best ‘top layers’ I’ve ever experienced. By that I mean that this jacket is wind and waterproof yet really retains a high level of breath-ability to keep the wearer comfortable and dry – something that very few other jackets can achieve, including some very big names in outdoor wear. This is largely due to it being made from a double layer of green Ventile®, a 100% cotton fabric which was originally developed for fighter pilots during World War II, to keep the cold and wet out, yet still remain comfortable. John Fenna, our resident clothing and textile expert, once told me that Ventile® was just about the best material that you can get for outdoor wear – and an all-natural fabric too. Apparently the material is made in such a way that the densely woven cotton fibres swell when wet and seal the jacket; the more it is used the better it becomes.

In spring and summer the Rover will keep you dry in rainy spells but won’t make you sweat when the sun shines. The one thing that I would say is that in winter weather the Rover should only be considered as the top layer, and needs a warm middle layer – such as a fleece – for extra warmth. Any fleece can be used, but Country Innovation do make their own interactive fleece (£75) that zips straight into the jacket on a separate inner zipper.

Features of the jacket include articulated voluminous arms that allow good freedom of movement when shooting, fishing or working. A substantial detachable hood is included with a double ‘D’ ring volume adjuster on top to assure good fit, and a drawcord for pulling the hood close into the face – this works well with hood’s high standing three-stud ‘collar’ on the hood which gives maximum protection to the face and neck area.

The jacket collar is moleskin faced and this extends 2/3rds of the way down the inside of the ‘inner’ interactive zip. The main YKK ‘two-way’ zip closure is robust and covered by a press-stud closing storm flap giving double the protection against rain – especially the torrential, all angles type!

There are no less than eight pockets on the Rover: the two large bellows cargo pockets (ideal for cartridges) situated at the lower front both with separate zipped handwarmer pockets in the rear seams. A second pair of handwarmer pockets are situated on the chest – these both contain press stud tags that can be used to hold the bellows pockets open for quick access to cartridges. A large zippered security pocket for wallet, licences, paperwork etc., is sited at chest height between the main zip and the right hand side of the storm-flap while a very large (12-inches wide by 8.5-inches deep) Velcro tagged pocket sit in the lining directly below, also on the right-hand side. That should be enough cargo space for anybody.

There are drawstring adjusters at the neck, waist and hem for perfect fit or for ‘battening down the hatches’ in really bad weather. Finally press studs on the cuffs give three levels of adjustment, while a stud inside each cuff gives an anchor point for the sleeves of the interactive fleece when worn.

During the time I’ve been wearing the Country Innovation Rover it has been faultless in keeping out water, and better still it is the only jacket I’ve ever worn that keeps you dry from both inside and out – probably the only one that has thoroughly lived up to its breathable tag. An added bonus is that the Ventile material is ‘rustle free’ and virtually silent in use, even when your arm rubs the body of the garment. The Rover is available in sizes from S, M, L, XL and XXL but they are not cheap – quality this good never is – with the Rover and Lady Rover Jacket both having an RRP of £345.

It is worth noting that Country Innovations also make the Osprey, Innovation, Falcon and Traveller jackets (some in Ventile, some in other materials) which are of similar quality and features but some being significantly less in price.