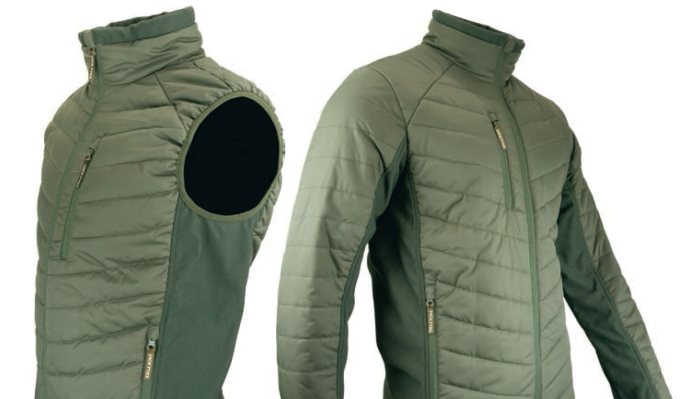 When it comes to clothing, I’m sure many would agree that Jack Pyke of England seem to have all the bases covered, with caps, hats, shirts, fleeces, jackets, trousers and even dedicated rainwear. However, the ethos at the company in more recent years definitely seems to be progression, with the launch of what they term their ‘Hybrid’ garments. This shows that they’re marrying what they’ve learned themselves in the manufacture of outdoor wear to create a few uniquely appealing garments.

In essence, clothing termed as ‘Hybrid’ isn’t a new style, but it is the first time Jack Pyke has offered and used the concept. Now, many will know of their Weardale range, which at its core are two items of ‘Quilted Wear.’ The quilted outer look of these garments is due to the insulation that has been added, which in turn makes them warm to wear. Also, the company has most recently launched a hi-tech lightweight rain jacket known as the Pro-Lite Hunters Jacket, which is designed to be light, waterproof and windproof. Now, it’s these two very different styles that have been used to create this hybrid apparel.

The company’s new Hybrid Gilet and Hybrid Jacket are manufactured from 100% coated polyester body, which is filled with 200-grams of thermal insulation. They feature contrasting side panels produced from interlock polyester polar fleece and have full-length front zip openings with chin guard. The latter becoming a standard feature on many of the company’s more recent offerings. Another laudable feature is the high stand-up collar, that when zipped fully up provides great protection at the front, sides, and rear.

For storage, both have two zipped lower pockets as well as one on the chest. These all show pull assists, plus there’s an embroidered Jack Pyke logo on the reverse of the collar, which adds an extra touch of style. Both of them feature an elasticated waist and cuffs.

The Hybrid Gilet and Jacket are a further indication that Jack Pyke is adding more of what can be termed ‘sport leisure wear’ to their clothing roster. The emphasis not only being on the performance of the garments but also their stylish appeal. However, when it comes down to brass tacks, in relation to outdoor wear, it’s the performance that counts and in that respect, both fulfil the roles they’re designed for very well.

Sometimes full quilted wear can be too bulky, especially if the requirement is for extra insulation underneath a lighter over jacket or raincoat. However, these are both ideal and are far less restrictive to movement. Also, they’re very well suited should you wish to mix and match them with fleeces or base layers so, in that respect alone, both are worthy of serious consideration, no matter what the season.