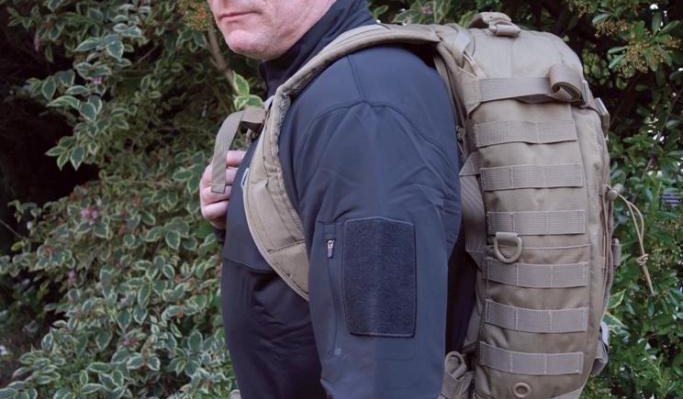 Last month, I had a good look at some quality items from Cannae Pro Gear, imported in to the UK by Scott Country; The Triple Acies 3 Rifle Bag and the Armory Range Bag were even more impressive than I’d imagined from the press release I’d read, so when a Phalanx Helmet Carry Duty Bag arrived, I was keen to see if it was as good as the other products. After spending time with it, I can say that it is! Here’s why…

This is a full-sized, two-day duty pack (other, smaller packs are available) and is the top of the range and largest pack that Cannae make. With a capacity of 37-litres, it’s plenty big enough for all manner of gear, spare clothing, food, water etc. and any other ‘stuff’ that might be needed whilst away from home. There’s no point a pack having a decent carrying capacity if it’s uncomfortable to carry, so this pack scores highly. The heavyduty, padded, rucksack style straps are made from Cordura Nylon- as is the whole pack- and are mesh lined. The bottoms of the straps can be unclipped from the section stitched to the bottom of the pack if required and the adjusters have Velcro straps to keep the excess straps from dangling around- a neat solution to an age-old problem, they are also used on the waist belt. Chest straps are also fitted, to stop the pack from slipping off the shoulders and they can be un-clipped and moved up or down to suit the user. The rear of the bag has a soft, padded section, so that items within the bag do not dig into the user and there are moulded-in channels to improve airflow- so a sweaty back should be kept at bay.

The waist belt is well-padded and is fastened with a pair of heavy-duty clips and there’s a handy zipped compartment, ideal for car keys, a multitool or mobile phone etc. on the right side. If required, the waist belt can be completely removed and used as a stand-alone belt, where the Molle strips would allow all manner of items to be attached. The belt is held in place in a ‘pocket’ at the rear of the bag but won’t slip round, as it’s held by Velcro pads.

37-litres is a fair size but Cannae haven’t just made one large compartment, they’ve designed a bag with a host of useful sections, for keeping gear just where you want it, until you need it. There’s a zip-up section at the rear that could take a water bladder, or even a laptop. All zips are high quality, made by YKK and have grippy rubber pulls on the end of a short length of Paracord.

Moving round the front, there is the helmet carrying compartment that has a load of Molle attachment points stitched to the front (there’s Molle all over the Phalanx by the way!) with a small zip-up pocket at the top and a pair of sturdy plastic D-rings either side. Once unbuckled, the front flap can be pulled out to reveal where the helmet can be stowed; shock cords, complete with sprung toggle adjusters, allow for the helmet to be held securely, no matter the size. More Molle panels are fitted to the rear, so once again, plenty of options here! There’s also a zipped and padded eyewear compartment at the top. The bag can be opened up from here to reveal even more zipped pockets, some mesh, some plain material. The mesh ones would be ideal for a First Aid kit, as you could see exactly what items were available. There’s a drainage hole in the base of the bag and there are adjustable elastic straps fitted to the back wall as well. The large pocket could have a water bladder fitted, or maybe a laptop could be stored here if the one I mentioned earlier is used for something else.

If you don’t want to un-clip the front to gain access to the main compartment, there’s yet another zip at the top of the pack, and when un-done, you can reach inside for things. There are storm flaps on all zips, so the bag should stay pretty watertight. On top, there’s a heavy-duty carry handle with a rubber grip, and another D-ring next to it.

Should all the pockets mentioned so far still not be enough storage options, there are pockets on either side, the left one (when viewed face on) has an elasticated pocket for a water bottle, complete with drainage hole and D-ring to clip a bottle to. The right side has a zip-up pocket that could be used for all sorts of kit, including First Aid gear, rifle magazines or ammo boxes. Both sides have areas of Molle, so once again, plenty more carry options. On the bottom of the pack there are loops that could be used for a groundsheet or basha. On the left side of the pack there’s a webbing carry handle but I think that there should be one on both sides, so you wouldn’t have to think which side it’s on- a minor quibble but I think that Cannae should add one.

Apart from that last little comment, which is just personal opinion of course, I really can’t fault the Phalanx Helmet Carry Duty Bag. I can see it being useful in all sorts of situations, from Military and Police applications, Airsoft etc. and for general load carrying duties. It seems to have an endless number of pockets and compartments and at £149.99 it’s good value for an item that should last for years, whilst putting up with all sorts of abuse. It’s available in Black or Coyote from Scott Country.