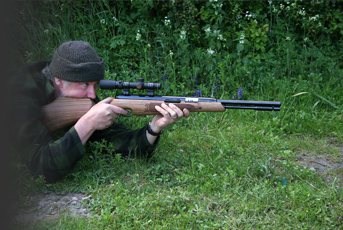 The TX 200HC from Air Arms offers a first rate spring gun for hunters or HFT shooters, and it’s the .177 version that we have on test. The TX has an enviable build quality and heft at nearly 9lbs but it comes easily to the shoulder and points instinctively despite it weight. The action is super smooth, and accuracy is first rate.

The feel of the gun overall has a lot to do with the nicely proportioned walnut stock that has a certain amount of flare to its design. The forend becomes more slender as it reaches the cocking arm with a rounded base but larger portion towards the trigger. This allows a good visual look and position of the supporting hand at two differing positions. The pistol grip too is big enough to accommodate the largest hand but is slim enough in the grip with open rake for a good hold. It is finished off with a white spacer and rose wood cap, a nice touch. The cheek piece has a high roll over comb, which suits me well, and a smart no nonsense black ventilated recoil pad finishes off this very good stock design. Chequering is laser cut and features neat fish scales rather than the usual cross cut diamonds – but the extra floral edges are a bit over the top for my tastes.

The TX200 has a smooth and consistent action with all the metal work having a deep, nicely blued and polished finish that gives an instant visual appeal.

Cocking the rifle is via a short (7 inch) under lever that has a knurled end for a better grip. As with all TX rifles there is a ratchet anti bear trap mechanism (Safe Lok) that ensures that the cocking handle does not inadvertently fly back up if you accidentally let go during the cocking stroke. A release lever (positioned just behind the sliding breech) can be depressed to over-ride the ratchet during the cocking stroke.

A certain amount of pressure is needed to release the cocking lever from the detent ball bearing retaining mechanism, but then the cocking stroke can be easily carried out in one smooth action. There is a large ‘sliding breech’ loading port cut into the cylinder wall and a pellet can be easily thumbed directly into the barrel’s breech.

With the cocking lever locked in the back position you need to push the front edge of a ratchet over-ride lever to release the anti-bear mechanism, so that the under lever can be returned to rest under the barrel again.

The barrel sits within a 9.5 inch shroud (bull barrel) and is actually about three inches shorter than this, making for a neat looking and compact overall design. The shroud has many benefits, one of which is that the muzzle crown is protected from mishaps whilst hunting. Also the void between the muzzle and the end of the shroud acts as a small yet quite effective primary expansion chamber for noise reduction. However with that short barrel the muzzle blast is still acute, so Air Arms have threaded the shrouds end so an adapter plug can be fitted to deaden the noise or a male threaded section with ½ UNF so a sound moderator of your choice can be fitted to maximise noise reduction, although this may spoil the compact lines of the HC rifle.

The excellent CD (Computer Designed) trigger unit is fitted to the HC, as it is to all Air Arms spri ng powered rifles. It is a great ‘off the shelf’ trigger unit, especially for an air rifle primarily designed for hunting. Factory settings are light enough to please most shooters and certainly the smooth trigger helps achieve the impressive HC’s accuracy.  There is quite a long first travel from this two stage trigger and then the sear breaks very cleanly at around 3lbs weight.

The safety is an automatic unit with a button protruding from the left rear of the end cap of the receiver. On cocking, the button pops out and makes the trigger safe and then needs to be pushed back in before the rifle will fire. It’s a fool proof and reliable system.

I chose a variety of styles and weights of .177 pellets for the testing and conducted the accuracy groupings at 30 yards which is a pretty standard hunting range. In fairness the HC digested all the differing weights very well but as usual preferences were highlighted in the testing regime.

At the other end of the velocity scale the slowest were the Premiers (634 fps and 9.4ft/lbs), Bisley Magnums (652fps and 10.1 ft/lbs) and JSB Exact Heavies at 686fps and 11.1 ft/lbs. Accuracy was good with all three, the heavy Exacts grouping into a nice 0.55 inches for five shots, which is good for a sporter.

Personal choice with a good blend of velocity, energy and more importantly accuracy would be either the Lazadomes, Air Arms Fields or JSB Exact. The standard Exacts shot superb 0.35 inch groups at 30 yards with a healthy 767 fps and 11.1 ft/lbs energy which is more than enough for real world hunting.

As with other Air Arms rifles the TX200 HC is well made and finished to a high standard.  Price is realistic and provides a self contained compact spring powered rifle with accuracy to spare. The ratchet safety system may put some off, but I like the solidity and security it provides.

The TX200 HC is a good rifle to train shooters how to shoot a sporting arm with correct hold and follow through.  The stock is well proportioned and styled but the laser cut chequering decoration is too much for me, but overall a timeless classic which I would love to have as a .20 calibre - may be one day!