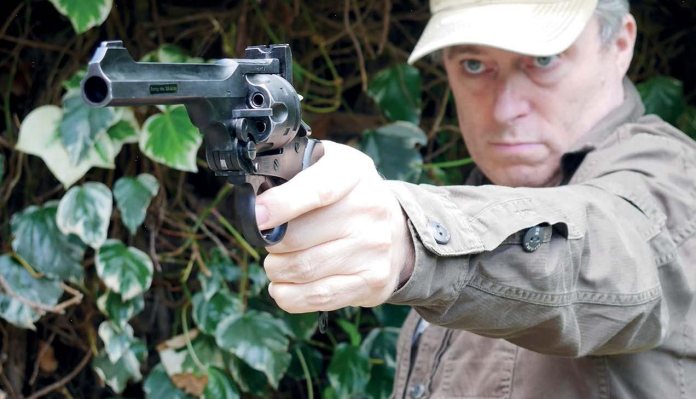 The subject of this review is a replica of the historic Webley .455 MKVI ‘top-break’ or ‘self-extracting’ revolver, as supplied to British and Empire forces from 24 May 1915 onwards. A commensurately larger and more imposing handgun than the .38 S&W MKIV that replaced it, it remains the most iconic of Webley’s wheel guns.

The pistol is produced under licence from Webley by Wingun in Taiwan, where it started life as an airsoft design. That’s fine by me. It would be lovely to have a 100%-accurate replica made in Birmingham from forged, filed and blacked steel, but that’s never going to happen, and such a gun would be hideously expensive. Far better to have something affordable, faithful enough to the original and great fun to shoot!

Unfortunately, Wingun didn’t get everything right, and the transition from airsoft to airgun has added some issues too. So, let’s get the five major bloopers out of the way so that we can move on to the many positive features of this gun. 1: the front sight should have a separate blade, retained by a screw, and there should be replacement blades for adjusting elevation. Front-sight height is inconsequential for an airsoft gun but not when you have a system (i.e. pellets/ rifling) capable of accurate shooting at longer ranges. 2: the slot in the camlever fixing screw should be wide enough to take the edge of a British silver shilling. This is a famous feature of Webley’s design. It’s great that the cylinder release works as per the original, but a combat pistol shouldn’t require a perfectly-sized screwdriver. 3: there should be actual or dummy securing screws fore-and-aft of the trigger guard. 4: Wingun’s dummy cartridges for airsoft BBs have an authentic brass finish and .455 Webley headstamp, but the pellet ones are plain chrome. 5: the original and the airsoft replica eject shells after firing, and Webley’s marketing says the pelletfiring version does too, but it doesn’t. (More on this later.)

Good, now I’ve got all that off my chest, let’s start enjoying ourselves! First off, the sheer size of the MKVI is a delight. It’s a full 12” from muzzle to grip-heel, some 6” tall, and hefts a near-authentic 2lb 4oz, with the balancing point just ahead of the trigger. You may prefer the more-compact police or civilian models with their 4” or 2.5” barrels, but with this gun, I’m very much in the “go big, or go home” camp. On that point, I love the fact that the true .22 muzzle is recessed ¾” into a cavernous .455-calibre hole.

The finish is satisfying, too. I went for the ‘battlefield’ option, which is not just mildly worn from holstering, but properly scuffed and scratched. Beneath this weathering, there’s a good even black, and beneath that, a less-than-perfectlypolished texture that speaks of wartime production. Also nice is the fact that they’ve quarantined all the obligatory modern markings and the - thankfully tiny - modern safety catch on the right-hand side while retaining the original calibre, patent and model stamps on the left-hand side.

Operation also leaves nothing to be desired. Whether opening the top latch, dropping the barrel, turning the cylinder, cocking the hammer or squeezing the trigger, everything has the correct feel of a well-worn gun, so smooth and just a little bit sloppy. Further pleasure derives from the inclusion with each pistol of a reprint 1937 training pamphlet that transports you back in time and into the shoes of the Empire servicemen blessed with the .455 Webley as their personal defensive weapon (yes, ‘PDW’ was already a thing in the ‘30s!).

When pellet-firing MKVIs were first offered in .177, I was tempted, but then came rumours of a .22, and once these finally arrived in the shops, I couldn’t resist. With pellet prices as they are, .177 unquestionably makes better economic sense, but the sheer scale of the pistol seems to call for upsizing, and the downrange impacts on reactive targets are undoubtedly more satisfying with the larger calibre. Nevertheless, the lack of front-sight adjustability is felt here, since the .22’s lower velocity and extra drop means point-of-impact quickly falls below point-of-aim as range increases, especially with standard-weight pellets.

Consequently, I selected lightweight 13.43-grain JSB Exact Jumbo RS domes and 11.9-grain RWS Hobby wadcutters. Over a sample of 10 shots, the Exacts gave an average muzzle energy and muzzle velocity of 2.76 ft/lbs | 304 FPS with an ES of 28 FPS. By the same measure, the Hobbies gave 2.9 ft/lbs | 331 FPS and an ES of 16 FPS. Accuracy was good with both types, and both retained enough energy at 12m to flip up the plates on my steel plinking target. However, the Hobbies punched neater holes in paper and cost significantly less, making them my all-round pellet of choice for the MKVI.

The front-sight blade may not be entirely the right height beyond 6m, but the sight picture it contributes to is excellent, combining a bold square post with a wide square notch. The simulated wear of the battlefield finish ‘silvers’ it too, enhancing visibility against a dark target. These then are sights that can be precisely aligned if desired. I was able to shoot some nice sub-1” groups at 6m in my first session, and moving out to 12m, the first 16 of 18 shots (3 cylinders) fell inside the C-zone of a reduced (18cm x 43cm) Fig.11 target. The last two went astray, over-confidence or fatigue undermining concentration and control, perhaps?

Here, I must confess that I almost returned the Webley to the shop without shooting it, because as soon as I aligned the sights with a target I realised that my eyes are no longer able to do the multirange focusing required to shoot over ‘irons’. I was already enamoured of the Webley, however, so I resolved to seek another solution. I found it in Lyman’s ‘EyePal’. A simple plastic disc with a central aperture, EyePal sticks to glass or plastic lenses via static. Magically, the aperture enables you simultaneously to focus your iron sights and your target. Basically, it’s a dioptre sight you can wear! A set (pistol & rifle) costs about £20. That’s plenty for two plastic discs, but a tiny price to pay to roll back decades of declining vision.

Back on track, a key reason for the MKVI’s historical success was the replacement of the distinctive but un-ergonomic, ‘bird’sbeak’ seen in previous marks with a squared-off ‘target-style’ grip, and the benefits are amply felt in the replica. The grip gives a secure, natural and repeatable hold, even when manipulating the hammer or the barrel latch, and is fully ambidextrous. The ergonomics of the gun are also fundamental to maintaining accuracy, given significant trigger pulls of 3lb 14oz in single action, and 8lb 8oz in double action. There’s some creep, but it’s predictable as well as authentic, and easily accounted for.

The grip also houses the 12-gram CO2 capsule that powers the pistol. To ready the MKVI for firing, pop off the left-hand grip scale, insert a new capsule and activate it by screwing in the lanyard ring. Then, load a pellet into the polymer seal that forms the ‘primer pocket’ in each of the six dummy cartridges supplied, open the pistol, and drop the cartridges into the cylinder. The military method is to work anticlockwise from the 10 o’clock position so that even a partially-reloaded pistol is ready to fire. Quick-and-easy status checks and topping-up as-you-go are further strengths of the top-break design. As noted, unlike the original, or its airsoft parent, the pellet-firer doesn’t eject, no matter how smartly you open it. This actually aids rapid reloading, as you can just open the frame, press a pellet into the back of each cartridge, close the pistol and carry on!

On firing, the hammer – which necessarily lacks the prominent striker of the original - impacts the valve stem, discharging a jet of gas into the skirt of the pellet, which accelerates through the smooth bore of the dummy cartridge and into the rifled barrel. Alignment and timing are good and the cylinder gap is minimal. A cylinder’s worth of pellets recovered after being shot into water showed no clipping. I also got about 60 good shots per capsule before velocities started to tank. CO2 pistols are most efficient when shot slowly, but most fun when shot fast. The MKVI is both accurate enough to reward deliberate shooting and dynamic enough for the instinctive snap-shooting drills outlined in the training pamphlet. The best of both worlds, then.

In conclusion, Webley might have asked their Taiwanese partners for a bit more attention to detail and have thought more about .22 pellet ballistics, but they have nevertheless produced a well-made and attractively-presented pistol that is a pleasure to own and to shoot. Optional extras include canvas and leather reproduction holsters, and extra cartridges. I have no need for the latter, but a holster, maybe!