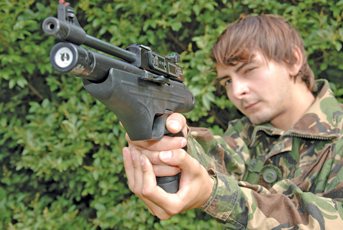 Fancy something different? Then this just might be the ticket; and it’s a bold move indeed from the ever-expanding outfit of Hatsan, based in Turkey. So is it a pistol… or a rifle? Well actually it’s both, and with an ‘all things to all people’ approach, it has to be one of the most versatile airguns launched of late.

Admittedly, given the dimensions of the pistol section, at the heart of the AT P2’s design, power has to be legally limited to air pistol specification, i.e. sub 6ft/lbs, so its duties are restricted, and hunting is ruled out. Yet once that fact is accepted, and expectations are kept to realistic levels, it can be enjoyed and appreciated for exactly what it is - not what it isn’t!

The concept is a good one, and the AT P2 is apparently the result of some on-going rolling development at Hatsan, with the prototype AT P1 morphing into the upgraded version we see here.

Hatsan supply this model in its own padded carry case, and whilst the case itself is a little bit ‘plasticky’, it does the job, and keeps everything nice and compact. Inside the case, is the multi-shot PCP pistol, an add-on shoulder stock assembly, filling adaptor, and complete spare set of seals, and silencer- all included in the price.

As a pre-charged pneumatic, the pistol’s cylinder needs to be charged with an external air supply, with the usual choice being a dedicated airgun pump, or scuba bottle. Either option needs to be factored in to the final total, so allow another £100 - £150 to cover this, in keeping with any PCP.

Hatsan utilize their ten shot rotary magazine design with this model, which is lifted from their AT-44 rifle, and with a totally floating barrel, 2-stage trigger, open sights and ergonomic target grips, there’s plenty to get excited about.

Hatsan are undoubtedly becoming a greater force to be reckoned with in the world of airguns, and their rise and influence has been nothing short of meteoric in the last few years. This model is proof of the company’s determination to not only follow the herd, but to carve out a niche for themselves, with some distinctive design work.

Whilst the final finish to their metalwork still looks a bit lack-lustre, there’s no doubting the steady improvement in engineering, and the AT P2 is nicely made, with some impressive machining.

Fully adjustable fibre optic open sights are a great addition on an airgun of this type, since many will be shot for pure pleasure in the garden. Here, and especially at close range, the simple pleasure of shooting with ‘irons’ can be a breath of fresh air- away from the technical world of Mil dots, ballistic reticles and so forth. That said, the performance of this model demands that glassware of some sort be fitted at some stage, to fully evaluate just what can be achieved for the record; so that’s what I’ll be doing here. Dovetail rails run across the breech block, meaning the fitting of either a rifle or pistol scope, is an easy option. For the purposes of my test, I opted for an SMK 4x20 pistol scope, with long eye relief, which I’ve found to be most impressive over usual pistol distances in the past.

Hatsan state that the moulded stock of the pistol is formed from what they term ‘advanced polymers’, and I have to say that the overall feel is excellent. Additional screw-on grips are used too, which are not only ergonomic in design (including a palm shelf), but pleasantly soft and rubbery to the touch.

Getting air into this Hatsan is fairly straight forward since the company adopts the probe method - which is undoubtedly the quickest. The filler probe, supplied, is screwed to the air line, then is just a simple push fit into the front valve thereafter. With this style of filler, just ensuring that the probe is still fully inserted at the early stages of charging, is good procedure. Once the cylinder is charged to the recommended 200bar of pressure, the probe is just removed and the dust cover rotated to keep dirt from the gun’s air inlet valve.

Next up,  loading the magazine. Removing it from the action just needs the small retaining bolt to be pulled forward, and the side lever to be pulled all the way back. The mag can then be pulled free, and a pellet loaded into each chamber in turn. With the mag back in place, retaining catch and side lever returned, the shot can be taken.  . As with many magazine designs, a positive cocking method needs to be adopted to ensure that both the hammer is fully cocked, and the next shot is cycled cleanly.

I chose to shoot the AT P2 as a pistol initially with the SMK scope fitted and the silencer spun into place.  The shots were admirably quiet; not that muzzle report is excessive anyway. As a pistol, this set-up is rather heavy when shot free hand, but feels good in the hand nonetheless, thanks to those excellent grips.  From a rest, and helped by the highly competent 2-stage trigger, some superb groups were easily achieved using Air Arms Diabolo pellets.  Half inch clusters at 10yds were an impressive start, but it was time for the final piece of the jigsaw.

Hatsan intend the rear stock to be a simple push fit affair, and with a spring-loaded lug to connect with the pistol body, it looks to be a great tools-free design. However, on test, the fit was irritatingly snug, with the result that a real tug was necessary to connect/disconnect. With the stock length adjuster similarly stubborn, this may be something that Hatsan need to address. That said, with the rear stock finally set to suit, and secured in place, shot stability was improved considerably. Not surprisingly, so were those 10yd groups, narrowing to just a quarter inch. Moving back to 25yds showed just what a potent combination this AT P2 combo could be, and with sub 3/4inch groups possible, I was sold on the concept.

Shot count is good too, and whilst velocity was rather spread over the 80 shots from the prescribed 200bar fill, experimentation with fill pressures will find the sweet spot. From my findings with the test gun, a 170bar fill will give around 50 shots with a far tighter spread. Back in the real world though, low power fun shooting just won’t be seriously affected by the velocity spread, especially over fairly close distances, so these findings and stats are to be fair, largely academic – i.e. unnoticeable to most users.

On paper, this AT P2 pistol does seem a little expensive when compared to many alternatives on the market. Let’s face it, £500 is a significant asking price whichever way you look at it; and there are plenty of options out there. However, this gun offers a really unique feel, and that bold, quirky design, whilst probably a matter of taste, certainly delivers in the handling stakes.

I couldn’t fail to enjoy myself whilst putting the AT P2 through its paces, and for the rewarding performance, novel design, and serious accuracy, it comes highly recommended.