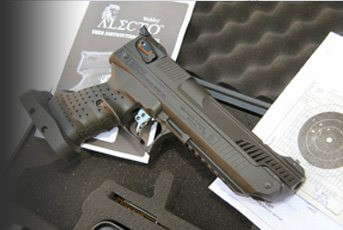 Air pistols are an odd breed; seen by many firearms users as little more than toys, which is far from the truth. Likewise the people who use them are often perceived as wannabes who just want that handgun look; again wrong. In this series I will be cutting through the smoke to give you an overview of what it available and more importantly what you can do with them from fun plinking to serious competition.

Many manufacturers offer pistols of all types – spring, PCP and CO2-powered and my research has shown that their popularity is on the increase. When I was given the assignment I was amazed at the superb quality of equipment available – even though I have a few pistols of my own. As we continue I hope to boost interest in the organisations and clubs who support these disciplines.

With air pistols I think we fell into a mind-set of - everybody who’s into them, knows what’s available and is either competing, or happy enough to just have a plink once in a while. Well after much discussion with various shooters that’s not the case. It became blatantly obvious they felt ignored, even marginalised, and not well served by the magazines who claimed to cater to all of the disciplines.

Going by what I’ve seen in the past twelve months there’s some amazing things been happening down at club level. With many now having dedicated pistol ranges. No longer can we ignore what is a serious sporting interest from all members of our shooting community.  Plinking is king for many and they’re content to bash a few bulls’ eyes and knockdowns, but shooting an air pistol of any type isn’t easy! I think many will be surprised at just how much effort is required to shoot accurately and consistently.

An air pistol producing 6ft lbs of energy or under doesn’t require a licence, however, what it does require if shooting near property is common sense. Always ensure targets have absorbent backstops, they may seem low powered but at 12-15-yds you just watch how a legal limit, spring-powered pistol can rip through a tin can. This puts it into perspective; as a stray pellet out of your boundary could hit something it shouldn’t with serious consequences for everyone involved.

On that point; many of us started as back garden plinkers and still do, and there’s no harm in that. But consider who might be looking at your apparent fun. Visually what you have is a handgun that with many makes of air pistol looks highly realistic. So if Mrs Smith is looking over her fence and sees what is apparently someone with a handgun; who’s she gonna’ call? It will do you no good, nor the sport and gun ownership in general.

I’m not trying to be a scare monger, rather just reminding fellow shooters it’s all too easy to put down the rifle, pick up a pistol and think you’re firing little more than a pop-gun. Wrong! Treat all equally, adhere to safety and sense at all times especially if there are youngsters around.

What’s Out There Now?

Air pistols use the same power and operation systems as rifles - spring-powered, pre-charged pneumatic and manual pneumatic, bolt-action, side or over-lever and break-barrel. They offer the choice of single and multi-shot feed. CO2 is still with us and going strong, though perhaps a little different as the majority of this equipment tries to look like and function as real handguns, which is part of the appeal!  Another is the fact that they use cylinder and box-type multi-shot magazines in both revolver and semi-automatic format. Power is supplied by a disposable, 12-gram CO2 bulb, which gives a decent shot count per fill.

Triple P competition, Action Pistol, and of course the new disciplines of Iron Plate Shooting and even APHFT (Air Pistol Hunter Field Target) courses, run after or alongside a main event. Obviously all competitors know they can’t hunt with a pistol but the courses are now much more interesting with tricky targets in trees or close to cover just like a full course but closer, for obvious reasons.

The majority of normal air pistols are the manually cocked spring piston type. With break-barrel actions being the most common as they are easier to cock. Some are capable of producing near the 6ft lb legal limit, which makes them the favourite for use on reactive (knock down) targets.

Pre-charged Pneumatics (PCP) are technically more accurate and easier to shoot as they offer no discernable recoil effects. Unlike a spring gun that has both spring and piston moving forward to fire the pellet. Many take to these PCP discipline as it helps with their rifle shooting. That being timing the shot and ensuring trigger control and follow through are just as they should be.

There are three types of pneumatic pistols; single-stroke, multi-stroke and PCP, the latter use an air reservoir just like a comparable rifle and are filled in the same way by bottle or pump. Single-strokes offer only one cycle (stroke) of the operating lever to compress the air in the reservoir. Usually these are of lower power output. If it’s a multi-stroke then the rule of thumb is the more pumps you put in the more power you get out. However, like pump-up rifles, they soon become tiring so not really a model the serious shooters would opt for.

The PCP system is very much in the match/target pistol domain and they’re often more expensive. However, you get power, recoilless attributes and the most strenuous thing you’ll need to do is open the filling bottle valve. The best known types are those from the Falcon range and they are exceptional; apart from the price! Shooting is a joy and accuracy unwavering. Since then Brocock seem to be setting a trend with their family of Aim X PCP guns.

When they first came off-ticket there was hardly a week went by without a new CO2-powered pistol appearing. With the option of a semi-automatic or revolver look, both types use a single/double-action mechanism (trigger and thumb cocking) with a rotary magazine holding a number of pellets. Fast to shoot and easy to reload they gave airgunners something new and ex-handgunners something back in terms of equipment they knew and loved. Slip in a 12-gram bulb, slap in the magazine and pull the trigger, with the CO2 good for a few reloads too.

This trend seems to be going that way again, which is all for the good. A new boy on the block is the ASG from Highland Outdoors. They’ve got some absolutely wonderful replicas but they shoot BB’s or are virtually on the fringes of airsoft as they fire 6mm BB’s. But if it’s manufactured to a high quality - you’ll see it here.

This class of equipment is often initially denigrated by firearms users; but I have seen many convert to it whole heartedly once they realise its fun and potential. Capable of good accuracy and also able to handle multiple targets too, they are hard to resist. The industry is driven by sales, people are coming into our sport not because they want to hear about the latest supergun, or what I shot last week. But they want something that gets them interested and excited, which this class certainly does.

Sighting systems and accessories can be as precision or exciting as you like. Pure target work requires match iron sights, with options on aperture and blade size, micrometre adjustments, orthopaedic-type stock and muzzle weights etc. The more Triple P types use standard iron sights with limited adjustments. But where it gets exciting is the open arena, here the red dot is king, which most of us are familiar with. They allow fast target acquisition and come in a bewildering array of models and types.

Moving on from this is the ability to mount torches and lasers, which also have their place, with course of fire to suit. OK a bit more tactical but don’t knock it until you have tried it either! If you like there are even low-powered, long eye-relief pistol scopes, which are a bit different. I have even heard of a CO2 pistol fanatic who has a compact NV scope on board one of his collection! Why, well does it really matter?

To end Part 1, I’d say watch this space for gun and equipment tests, details of associations/contacts, types of competition and all the other good stuff. Finally a very personal and huge thank you to T & J. J McAvoys - without their help this venture wouldn’t be possible, particularly Hannah…

2, A bit more exotic, but none the less interesting; three CO2 pistols from the ASG range, well made, accurate and realistic – yes they are air pistols…

3, Webley Typhoon break-barrel spring air pistol, this more basic design is still popular due to its simplicity and price

4, Crosman 1377 (formerly Medallist) manual multi-pump pneumatic pistol, this system has both plus and minus points

5, 12-gram powerlets are housed in the pistol grip and pierced as they are loaded to provide the power for the shot

6, Optics such as scopes and red dots have become part of the air pistol scene along with lasers and even compact torches

7, The over-lever single shot Gamo Compact. This has already become a classic, boasting one of the best match/target style walnut grips in its price range

8, You can even get PCP pistols here we see a pair of Falcons, one multi-shot the other single loading