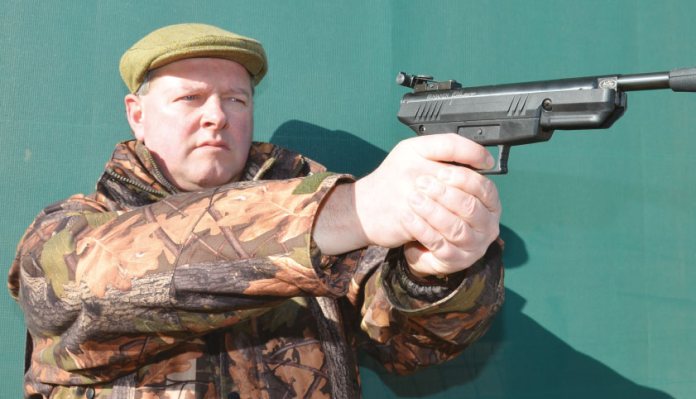 When Theoben’s patent expired for their ingenious gas-ram design, some years back, a plethora of manufacturers weren’t slow in coming forward. Indeed with something of an undignified rush to launch similar designs across the market, few brands were left without a ‘rammer’ in the product line-up. For the uninitiated, the concept sees a sealed chamber of gas (or air) power the piston, which in turn, powers the pellet with progressively compressed air in the usual way. No spring means, in theory at least, less noise and resonance and the various designs in existence achieve this to a greater or lesser degree.

Fitting the gas-ram into a pistol was of course the logical next step, and whilst other manufacturers have now entered this market sector, such as Gamo with their P900 IGT, Crosman claim this Benjamin Trail NP is the world’s first Nitro Piston break-barrel pistol to utilize the system.

The Benjamin comes supplied in a neat polystyrene carton, with a composite barrel sleeve, separately stowed alongside. This is a simple snap-on attachment that just requires the barrel to be pushed down into the slot and the sleeve snapped up into position. Once in place, it gives the pistol an extended beefy profile, with hints of the famous BSA Scorpion. However, its main reason is to act as a cocking aid, which as can be imagined its short barrel requires.

The stock is a one-piece black composite moulding and with a precise raised grip pattern, and integral trigger guard all part of the design, it’s quite stylish overall. Open sights come as standard, with a moulded foresight fitting at the muzzle, complete with red element, and a metal rear-sight assembly featuring twin green dots.

This Benjamin looks fairly well made, and there’s attention to detail too. Look to the breech area, and there’s an adjustable cross bolt, along with its own keeper screw, meaning any slack can be taken up further down the line if necessary. The chemical blueing to the barrel and compression cylinder is a little dull, but finish overall is more than acceptable.

Pick this Benjamin Trail Nitro Piston up, and it feels satisfying in the hand, with a solid feel and a pleasing level of workmanship on show. Balance wise, it is quite front heavy, with or without the ultra light barrel sleeve fitted.

I opted to shoot it with open sights first, since the simple approach is half the fun with this style of airgun. Breaking open the breech proved a little stiff, and whilst it gave in, with a positive jerk downwards, occasionally, a swift nudge over the knee was required. Once broken, the actual cocking stroke is fairly easy to complete and it has to be said, incredibly smooth helped by the barrel extension no doubt. A major advantage here is the lack of a ‘graunchy’ mainspring inside and with Benjamin’s ‘Nitro Piston’ system utilizing that sealed chamber of Nitrogen to power the piston, the end result is a super slick, ultra fast action, devoid of ‘twang’ and with minimal vibration to speak of.

There is of course plenty of movement going on, but if you’ve ever used a gas-ram powered airgun before, you’ll appreciate the civilized snap of the firing cycle. Benjamin/ Crosman make much of the fact that this system should be 70% quieter than a conventional spring piston set-up, and whilst I can’t scientifically prove this claim either way, I can certainly vouch for how relatively quiet it was on test.

Given the weight distribution, I did find that this Trail NP flipped up at the front a little on firing, but many will find that a welcome feature in itself I’m sure. The cast metal trigger blade helps the cause, but a very smooth, fairly light trigger mechanism adds to the enjoyment factor. Yes there is some creep, but it only takes modest pressure to gently pull through and release the shot. For the record, the cross bolt safety catch is a manual design, whilst the action can be de-cocked if necessary. The snap-on barrel sleeve does move a little under pressure, but it works well enough, and is invaluable as a cocking aid.

Shooting over 10yds, I was immediately impressed with the fibre optic sight picture. However, I soon found that I’d run out of elevation adjustment on the rear-sight, with the impact point still striking a few inches low at this range. With a compact SMK pistol scope bolted into place, I soon had the Benjamin zeroed up, and accuracy could be properly assessed. Groups of just under 1.25” with a variety of pellets was a fair return, and I would expect groups to improve further still as familiarity grew.

Chronograph readings with 7.9-grain Crosman Premier pellets showed admirable consistency of just 14 fps over a ten shot string, and a healthy energy output of 4.7ft/ lbs average; making this one of the more powerful break-barrel pistols about.

At 3.4lbs in weight, this Benjamin Trail Nitro Piston sits well in the hand, and with that super slick firing cycle, and no spring to worry about, it holds much appeal. So for an all round, informal pistol, to use as a quick despatch gun at close quarters, or for informal target shooting, it represents a worthy and unusual addition to the Benjamin/ Crosman stable.