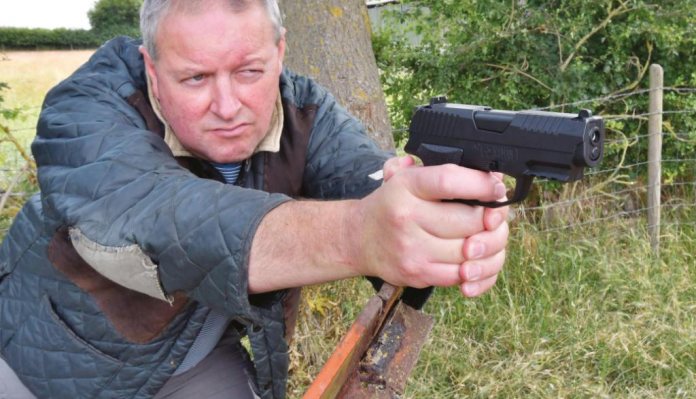 CO2 as a power source often means fast fire fun shooting and the Iceman pistol from huge American manufacturer, Crosman, offers just that. For what we have here is an 8-shot repeating handgun, that can fire either BBs or pellets, that offers a combined single (S/A) and double-action (D/A) trigger system as do a lot of the modern semi-auto pistols it tries to emulate. There’s also a manual safety catch, always useful and the now obligatory, integral Picatinny rail section under the grip frame, for mounting a compact gun torch or laser projector for point and shoot operation.

OK; open the box and pick up the Iceman, and the lack of weight, does rather give things away, but, that super easy handing is actually a bonus when you think about it, once you consider that this pistol is all about stress free fun. Construction is nearly all from synthetics, but again, consider many real world, modern firearms of this type are now extensively constructed from ballistic polymer and what once may have looked a bit cheap and crude, has now become the norm!

Yes, we are talking a ‘no-nonsense’ approach here, since the Iceman sports a relatively plain exterior, and fairly simple construction; but accept its limitations, and it’s then difficult not to enjoy the experience. Time to get a closer look then and see what we get for the very reasonable £80 asking price.

Of course, as the Iceman relies on a diet of 12 gram CO2 capsules to keep it running, we need to get inside, to power it up. This is done by getting a finger under the indent on the base of the grip and snapping off the two sides of the plastic grip plates. These are a simple, snug, push fit; so, with them removed, we now have full access to the folding wing nut at the base. Use this to unscrew and slacken off pressure, if removing an old capsule. Then, insert a new one, nose-first and gently nip up the wing nut until the pressure created pierces the top of the capsule. Gently tighten to stop any hiss of escaping gas, fold the nut away, snap the grips back on, and the pistol is charged. A cautionary note at this point, as if you’ve never used CO2 before, you need to bear in mind that the 12 gram can get extremely cold in use, and especially on removal, as any residual liquid inside quickly turns to gas.

Next, we need to fill the magazine, which is exposed by pulling forward the tiny catch on top of the frame and letting the barrel assembly with the mag at the rear spring upwards. The 8-shot, revolver-like clip can be pulled from its spindle and pellets pushed flush into each chamber. Push it back into the action, snap down the top assembly and the Iceman is ready for action. That’s the prep done and it’s all simple stuff, completed in seconds. In truth and although looking like a semi-auto pistol, the Iceman is, in fact a revolver system, that harks back to the first CO2 handguns of this type we saw in the UK.

As mentioned, Crosman specify the Iceman as able to shoot BBs as well as pellets, but when given the choice, I would always recommend sticking to pellets, given the propensity for BBs to cause potentially dangerous ricochets as they are round steel balls. Wear safety glasses regardless, since the fast-fire style of shooting that this type of pistol encourages, is invariably shot at fairly close range, and again, ricochets are that bit more likely. An appropriate back stop that absorbs the pellet’s energy makes sense, but you only get one pair of eyes at the end of the day, so why risk it?

My aim was to test the Iceman over a ten yard range, but my first stop was the chronograph. Of course, with this grade of pistol, consistency figures are fairly irrelevant, but for the record, a typical firing cycle, using Umarex, flat headed, wadcutter pellets, incidentally, saw velocities starting in the region of 323 fps, and then drop to around 160 fps over the course of 45 shots. 1.8 ft/lbs, down to around .4 ft/lbs if you insist on such detail. Obviously, as the power in the capsule decreases, so does the working velocity, so you need to ascertain how many, usable shots you can get out of a single 12 gram charge. I shudder to use the word consistency, but you get the idea I trust.

Billed as double action and single action system, I obviously tried both operating modes and, whilst pre-setting the silky rear hammer for single action, felt the right thing to do, I did experience some sporadic failure of the magazine clip to rotate in this mode, missing the odd shot. Shooting the Iceman in double action mode however, where the trigger is pulled through from start to finish, worked faultlessly, despite the weight being that bit harder.

Accuracy-wise, we aren’t talking match grade here, but if we remember the emphasis is on the 8-shot magazine and repeating action, then groups of a tad over two inches over the ten yards, are perfectly acceptable. The size of the base of a drinks can basically, and that sounds like an exciting competition for a start and a measure of what the Iceman is really all about. Another point to note on trigger operation, is that the double action pull will cause the gun to yaw left to right in your hand, which is almost unavoidable as you roll off the shots. Here, a more secure, double handed, Weaver-type grip is to be recommended every time.

So, there we have it; easy to handle, use and maintain, the Iceman is a great example of just why the CO2 market has exploded and, given the combination of that lightweight body, fast repeating mechanism and effortless operation, all for a reasonable asking price, it should find many fans.