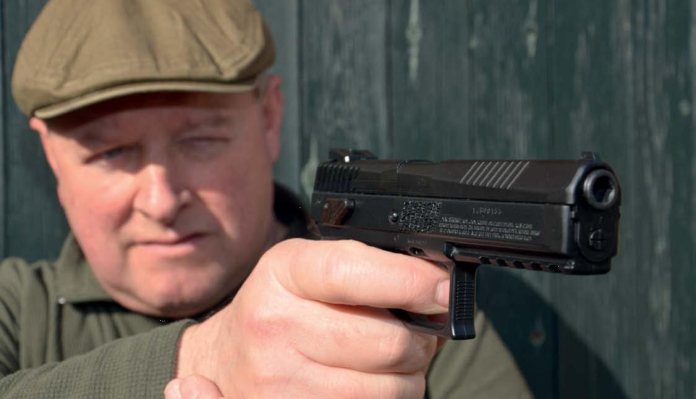 Ceska Zbrojovka or CZ as they are more commonly known, are a famous Czech brand, and the pistol on test here is a CO2-powered airgun replica version of their CZ P-09 9mm firearm.

CO2 opens up the fun side of airgun shooting like no other power source, and gives rise to all manner of exciting design features, courtesy of the small, discreet, 12-gram power capsule, concealed within the pistol’s grip.

The blowback system utilised, means the metal top slide of the action actually moves back and forth really fast as the shots are fired, and this sensation helps add an air of authenticity to the proceedings. Significant recoil is effectively designed in, and it is features like this that attract an army of pistol fans, denied access to live stuff, who first and foremost, just want to experience something which comes close to ‘live fire’.

The tag line from Sportsmarketing (SMK), the UK importers of this model, is ‘Realism, Precision, Performance’, and there’s no doubt that the CZ P-09 looks the part.

Manufactured by ASG in Japan under license from CZ, this airgun is a full-size tactical pistol, apparently designed from the original specs. The top slide, as mentioned, is all metal, as are the trigger blade and hammer. All other external components are formed from polymer. That’s hardly a negative, given that modern firearm chassis are invariably made from ballistic polymer these days.

So, we’ve established there’s a realistic look. There’s also an integrated Picatinny accessory rail for mounting a light and/or laser up front. There’s a rifled inner barrel allowing the use of pellets or steel BB, a 3-dot open sight system, a manual safety catch and a 16-shot stick magazine.

Access to the 12-gram CO2 capsule compartment is easy. Just squeeze and pull away the grip’s back strap and the chamber is exposed. Now, insert a new capsule neck-first into the chamber and use the integral tensioner bolt at the base. Simply twist it gently clockwise and the capsule should pierce and seal.

Power is now available, but before the fun can start, the magazine needs filling. Press the small mag release catch that’s located top left of the grip and the stick magazine will eject, which has an 8-shot rotary magazine at each end. Just push a pellet head first into each aperture, turning the rotary mag as necessary until full. The manufacturer recommends flat-headed wadcutter pellets, and it probably pays to use these, since there will be minimal head protruding, which may foul smooth cycling of the magazine. With both ends full, we now have 16-shots at our disposal. Slide the stick back up inside the pistol’s grip until it clicks, and we’re ready to go.

The manual safety catch is on each side of the chassis, however, it is a bit fiddly and only operates with the small spring-loaded button pressed on the left side catch.

Open sights are all part of the design, and whilst these are totally fixed and nonadjustable, the massive saving grace is the clear white dots, on both the foresight and rear-sight notch. The resultant sight picture is excellent, allowing for quick target acquisition and easy aiming.

Given the blowback system on offer here, shooting freestyle is really the way to go. Pull the trigger in quick succession and the top slide flies back and forth, going some way to replicating the sensation of shooting the live version. It all happens very quickly, but it’s great fun nonetheless.

My best groups were around 2.75” over 10 yards, but aim for a drink cansized target and you won’t be disappointed. Blat off 8-shots as fast as you can pull the trigger, and then a quick mag switch over is required. Just press the mag release catch, then grab the mag and quickly turn it top to bottom and re-insert, then a further 8-shots are ready. It’s great fun, and with that notable kick in the hand as the blowback action does its thing, it’s hard not to get drawn in.

I really like the fact that we can use pellets here and dispense with BBs, given their tendency to ricochet alarmingly, but I would still highly recommend the wearing of safety glasses at all times, as the relatively low velocity itself can cause ricochets at the close distances over which this pistol is intended. Whilst on the subject of safety, as with any multi-shot airgun, fire 6-shots and walk away, leaving this pistol lying around is basically a recipe for disaster, so get used to a safety regime around it, which should include ejecting that magazine stick after use regardless, thus proving to anybody in the vicinity that it’s safe. OK, good point! Don’t leave it lying around either!

Consistency isn’t really worth worrying about with CO2 and this pistol is all about fun shooting, but for the record, velocity did hit 348fps at its peak, for a maximum 2.3 ft/lbs. As for shot count, I managed around 30 shots per 12-gram CO2 capsule before velocity started to plummet, which gives a good idea as to what to expect.

Overall then, a tidy little pistol. Visually very realistic when compared to the live version on which it’s based, yet also a neat design in terms of the airgun mechanism that lies at its heart. Great fun, and for the current price of £169, good value too.