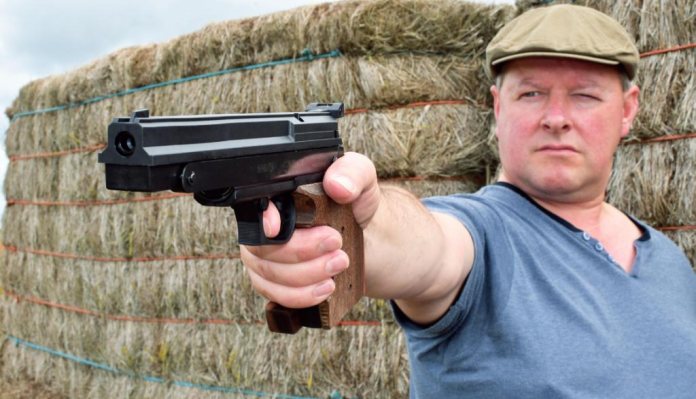 Shooting for me is an all absorbing sport, although I don’t deny that I am a little one track. I’ve tried plenty of live disciplines over the yearsshotguns, full-bore, rim-fire, even live pistols in controlled conditions; but nothing quite does it for me like airguns. Quiet precision, and of course the total flexibility to use them on your own land, largely unhindered, is of course a massive part of the appeal. But it’s also the self -contained aspect of an airgun that also get me going.

Take it to the limit, and we arrive at the single stroke pneumatic; and this for me remains the ultimate power source- still the Holy Grail where full powered rifles are concerned, as a succession of manufacturers dabble, and ultimately fail to produce the goods. Yet where lowpowered pistols are concerned it’s a different matter entirely, with several great examples available to today’s enthusiast.

On test here is a time-honoured classic from Spanish airgun giants, Gamo, and it still has plenty to offer, all for a reasonable asking price. For the Gamo Compact is a single stroke pneumatic pistol that comes very well appointed, aimed primarily at the target shooter who wants a reliable, accurate entry level pistol, that won’t empty the bank account.

‘Single stroke’ means power is effectively self-generating, by-passing literally at a stroke, the biggest drawback of the PCP- namely that of being reliant upon an external power sourcebe that a dedicated hand pump or cumbersome diver’s bottle. Gamo’s Compact has also built up a reputation in Pony Club circles for being a great little workhorse, a match pistol trainer for youngsters keen on shooting, who need encouragement and reward for all the hard work. Currently priced at £189, the Compact is a bit of a bargain too, so let’s get hands on and see what maintains its position in Gamo’s product line-up, after so many years.

First impressions are favourable, since this model comes very well presented in its own padded hard case; albeit a tight fit! Open the case and there’s even a tin of pellets along with the instruction leaflet, but it’s the standard features that most impress. Adjustable open sights and an adjustable trigger blade are a good start, but when you take in the anatomical wooden grips, it soon becomes obvious that this model has been seriously thought through, built to do a job.

Indeed, handle the compact for the first time, and you instantly feel you have a serious piece of kit in the hand. For those anatomical grips, fashioned from highly attractive walnut, are a cut above, despite being made from two halves. I have large mitts admittedly, but in the aim, my leading hand perfectly wraps around the contoured grip, as if I had been used as the model! Get comfortable, slacken off the Allen bolts at the base, and then push and slide the palm rest into position, to the point where it just feels cosy, supporting the base of the hand and job done. A straw poll of a variety of shooters at my club seemed to suggest that the designers had it about right, as all who mounted the pistol, felt at home in the aim, certainly after some familiarity and minor adjustment with the shelf section.

Build quality is fair with the Compact, and whilst many components are synthetic compound, the use of metal sides to stiffen the chassis, and a steel barrel, and of course those grips, are enough to maintain a quality feel to the proceedings.

And so to that glorious power source. As mentioned, single stroke pneumatics hold huge appeal for me, and it’s that selfcontained element that gets me going. So just how does it work? Well to start the process, we need to press that plastic button at the rear of the action, and this allows the top assembly to flip up. Now lift the top section up and forwards, all the way to the end of its arc of travel. The Compact basically sucks in air ahead of the internal piston as this movement takes place. Push a pellet home in the lip of the barrel now exposed inside the rear of the top assembly, taking care to push it in flush. Now gently and smoothly close the action, which by now will be under some pressure, to compress the volume of air held within. This part of the operation needs to be firstly carried out consistently, so that an identical volume of air has been compressed every time, and also that all parts of the hand are kept safely away from the two halves of the action, that are now about to snap together and close.

The open sights that come as standard take the form of a fixed post foresight which is all part of the front moulding, whilst the neat little rear-sight is fully adjustable, albeit with a screwdriver. On test, I set about zeroing the pistol, and whilst setting elevation was plain sailing, there was momentary confusion (it doesn’t take much!) when the windage screw went in the opposite direction to usual- most bizarre. In addition, I have to say that for me, the foresight bead, is a little too wide, as it totally fills the rear notch in the aim, making it difficult to be super precise. Improvisation was the key here, and a quick splash of white correction fluid was the answer. Problem solved, but a minus point on test for sure.

Sight modifications aside, I really enjoyed shooting the Compact, helped in no small part to a very usable trigger. Okay, pull weight is set by the factory, and non-adjustable, but the saving grace comes with the way the match blade can be rotated on its axis.

Cocking effort is reasonable too, if the compression stroke is completed in one deliberate motion. Just remember the golden rule, as previously mentioned, with this type of airgun- to be consistent in the arc of travel when cocking the mechanism, as this directly translates into consistency. Single stroke mechanisms can be among the most consistent available, but they do rely on that care being taken. Complete the stroke… and mind the hands-on closing! Then you can relax and just enjoy that quick snappy mechanism and recoil free experience overall.

As for accuracy attained, sub half inch clusters over 10-yards from a rest, were encouraging, and 1.25-inch groups from my free hand one handed pistol position, weren’t too shabby either.

The Gamo Compact is a smart pistol that’s very well presented and comes ready to go. The single stroke pneumatic format remains extremely appealing, offering as it does, slick performance, yet in a totally self-contained power source. Cocking effort is wholly manageable, and the features built in such as those terrific grips, are all there to maximise potential. Overall then, this good old favourite in the Gamo line-up deserves its place and longevity of service, for continuing to reward the efforts of the novice shot, and as such it remains a great choice as an inexpensive intro into the world of recoilless target shooting.